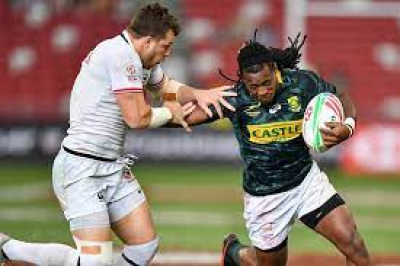 Springbok Sevens playmaker Justin Geduld will return to the HSBC World Rugby Sevens Series for the first time in two years after being named in the Blitzboks squad to contest the two forthcoming tournaments in Malaga and Seville in Spain later this month.

Geduld’s inclusion is one of five changes made to the squad for the first World Series event at Estadio Ciudad de Malaga, where South Africa have been included in the same pool as England, Fiji and Scotland. The experienced playmaker will return from injury alongside Sako Makata, Dewald Human, Mfundo Ndhlovu and Darren Adonis.

Geduld last played in a World Series event in Sydney in 2020, while Makata, Adonis and Human featured in the shortened 2021 series, playing in Vancouver and Edmonton, with Human captaining the Blitzboks in the Vancouver event.

Ndhlovu makes a welcome return to the squad having last played in Vancouver in 2020, after which the remainder of the season was cancelled due to the Covid-19 pandemic.

The five returning players replace Tiaan Pretorius, Ronald Brown, Shaun Williams, Muller du Plessis and Shilton van Wyk from the squad that won consecutive tournaments in Dubai late last year, with those victories handing the South Africans an early lead on the 2022 standings and a first seed ranking in Spain.

Blitzbok coach Neil Powell said selecting the team was not an easy task, but he feels that the squad named will be as competitive as their ranking suggest.

"We are lucky to have most of our squad available again, with only Muller du Plessis not available due to injury," said Powell.

"We also made a call to give Ronald Brown a rest as he has a slight knee strain and we decided not to risk him, but rather to recover as soon as possible.

"The Dubai group did really well, but with Justin, Sako, Dewald and Mfundo available again, we opted for some experience this time around.

"It is great to have Justin back with all his experience of 50 World Series tournaments and he would slot into Ronald’s role, while Sako, Dewald and Darren really played well in Canada, but sadly picked up injuries after that.

"Mfundo will be a straight swop for Muller and we are delighted to have him back as well. He was injured just before the Olympics last year, and I am pleased that his hard work is paying off. He will surprise many at this tournament, I am sure."

Powell said the fact that they will be playing at a new venue will create excitement amongst the players.

"All the participating teams will be experiencing a new venue, which will ensure a level playing field and the fact that we will not have any time zone issues, will be another plus for us," he said.

"There will be no jet lag for us, like we normally experience when travelling to New Zealand and Australia, so we are looking forward to the trip."

More in this category: « Newcastle sign Chris Wood from relegation rivals Burnley. Chris Morris calls time on playing career to focus on coaching at Titans. »
back to top