Kohli & others not happy with broadcaster Supersport after DRS saves Elgar. 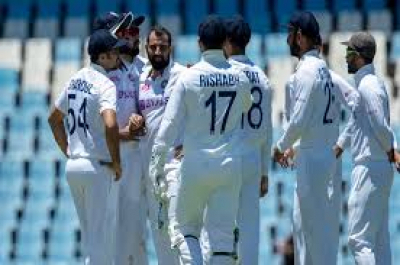 A number of Indian players, captain Virat Kohli among them, made public their displeasure about the broadcaster, SuperSport, with respect to the use of technology after Dean Elgar was reprieved on review on the third day of the final Test in Cape Town.

It was in the 21st over of the final innings of the match, with South Africa on 60 for 1 chasing 212 to win the series, when R Aswin hit Elgar on the pads. South Africa's captain was given out lbw by Marais Erasmus, the on-field umpire, but the decision was overturned on review with ball-tracking showing the ball going over the stumps.

The ball-tracking technology is authorised by HawkEye, an independent body, which relays the data to the host broadcaster, in this case SuperSport.

A visibly irritated Kohli walked up to the stumps, and spoke into the mic, saying, "Focus on your team while they shine the ball. Not just the opposition. Trying to catch people all the time."

The bounce of the pitch - a significant factor in Dean Elgar's successful review.#SAvIND pic.twitter.com/GI2rXjgjwd

Kohli wasn't alone,KL Rahul, the vice-captain, was heard immediately afterwards, saying, "It's the whole country against 11 guys." And Ashwin seemed to be addressing the broadcasters directly when he said, "You should find better ways to win, SuperSport."

The Indian players were not the only ones who didn't agree with the decision. Erasmus could be seen shaking his head as the pictures played out on the screen at the venue, and was heard saying, "That's impossible".

After the day's play, when Lungi Ngidi was asked if he trusted DRS to do its job as expected, he said, simply, "Yes". When asked why, he elaborated: "We've seen it on numerous occasions being used all around the world. It's the system in place. That's what we use as cricketers."

But the Indians were not on the same page.

Paras Mhambey, the bowling coach, said in his press conference, "We saw it, you saw it. I'll leave that for the match referee to have a look at it. There's nothing I can comment on it now. We've seen it all, just want to move on with the game now."

When asked if the Indian players were suggesting the broadcasters were manipulating the images, Mhambrey said, "Every individual out here is trying his best. Sometimes in a moment like this, people do say certain things. It's a game. I think it's fair we just move on. Everyone is trying their best. Emotions do come into play sometimes."

Ngidi further said, "Reactions like that show a bit of frustration and sometimes teams capitalise on that. You never want to show so much emotion, but we could see emotions were high. That tells us they are feeling a little bit of pressure.

"That was a good partnership [between Elgar and Keegan Petersen for the second wicket] for us and they really wanted to break it. Those feelings ended up showing there. Everyone reacts differently and what we saw there was what those guys were feeling at the time."

Elgar was eventually dismissed on the stroke of stumps, and DRS was in the picture again. This time, it was after India reviewed a not-out decision from the other umpire, Adrian Holstock, for a catch to the wicketkeeper off Jasprit Bumrah. It was a full delivery going down leg, and Elgar looked to flick but only managed to nick it, and Rishabh Pant took a diving catch to his right.

India reviewed, and Kohli was heard saying, "Wonder how they're going to show that." As it transpired, UltraEdge showed a spike as ball passed bat and Elgar was given out.

Chasing 212 to win the series, South Africa were 101/2 at stumps on the third day of the third match against India.