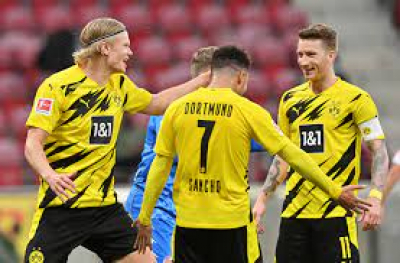 Red-hot Anthony Modeste and his in-form 1. FC Köln side host FC Bayern München on Matchday 19 of the 2021/22 Bundesliga campaign, while the second division roars back into action this weekend for the first time in 2022.

Defending champions Bayern began 2022 in unfamiliar style by losing to their bogey team as Borussia Mönchengladbach beat them for a second time this term, having already gotten the better of Julian Nagelsmann's side 5-0 in the DFB Cup back in October.

That loss was despite Robert Lewandowski scoring his 20th league goal of the season to give Bayern an early lead. They must now travel to Cologne to face a Billy Goats outfit that leapt into a European place on Matchday 18.

Modeste was on the scoresheet with his 12th Bundesliga strike of 2021/22 as Köln came from behind to beat Hertha Berlin on Sunday - a victory that moved Steffen Baumgart's men into sixth.

Star man Erling Haaland may not have been on target last time out, but Dortmund still pulled off the most dramatic of comebacks with a 3-2 victory over Eintracht Frankfurt.

Freiburg were on the wrong end of a turnaround themselves as they surrendered a two-goal advantage to DSC Arminia Bielefeld, but coach Christian Streich – who celebrated his 10th year in charge last month – still has his side well placed in fourth. All three points at Signal Iduna Park would move them to within just four of their hosts.

Meanwhile, Bundesliga 2 is back after its winter break, with FC St. Pauli looking to maintain their lead at the top having seen their advantage cut to a single point on the final matchday of 2021.

They take on second-bottom FC Erzebirge Aue on Saturday at 1:30pm CET in a fixture that forms part of a fascinating trio of games as SV Werder Bremen host Fortuna Düsseldorf and SC Paderborn 07 travel to 1. FC Nürnberg at the same time.

Saturday evening then sees second-place SV Darmstadt 98 take on Karlsruher SC from 8:30pm CET, while the Matchday 19 curtain is raised on Friday night by SG Dynamo Dresden vs. Hamburger SV and FC Hansa Rostock vs. Hannover 96 (both kick-off: 6:30pm CET).

Three games close out week 19 on Sunday, when FC Schalke 04 vs. Holstein Kiel is sure to catch the eye as Simon Terodde & Co. continue to look to break into the top-three against a Kiel side who concluded last year by emphatically beating table toppers St. Pauli 3-0.

That fixture (kick-off: 1:30pm) takes place at the same time as 1. FC Heidenheim 1846 vs. FC Ingolstadt 04 and SV Sandhausen vs. SSV Jahn Regensburg.

More in this category: « Mikel Arteta hails Arsenal’s ‘spirit and brotherhood’ in draw with Liverpool. Department of Sport hits back at calls to open up stadiums. »
back to top