Arsenal request postponement of north London derby due to Covid and player absences. 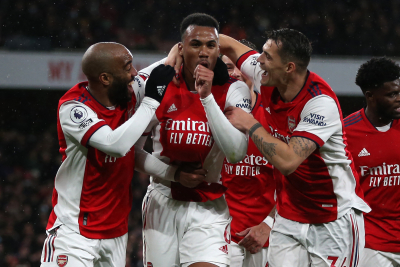 Arsenal have requested the postponement of Sunday's north London derby with Tottenham at Tottenham Hotspur Stadium because of a lack of available players.

The Gunners said they have "reluctantly taken this step" as a result of injuries, positive Covid-19 cases and players away with their countries at the Africa Cup of Nations.

The Premier League board will meet on Saturday to decide whether to grant Arsenal's request.

A statement from the league said: "The Premier League has received a postponement request from Arsenal FC relating to their away match against Tottenham Hotspur, due to be played at 4.30pm on Sunday 16 January.

"The Premier League Board will meet tomorrow to review the application and inform both clubs and their fans of its decision."

Earlier on Friday it was announced that Burnley's home game against Leicester City on Saturday has been postponed because of Covid-19 cases and injuries within the Turf Moor side's camp.

Gunners midfielder Martin Odegaard missed Thursday's goalless Carabao Cup semi-final first leg at Liverpool due to COVID-19, while Emile Smith Rowe and Takehiro Tomiyasu had been ruled out through injury.

More in this category: « Vuyo Mere joins TS Galaxy after leaving Swallows FC. Novak Djokovic to be detained ahead of appeal against deportation. »
back to top