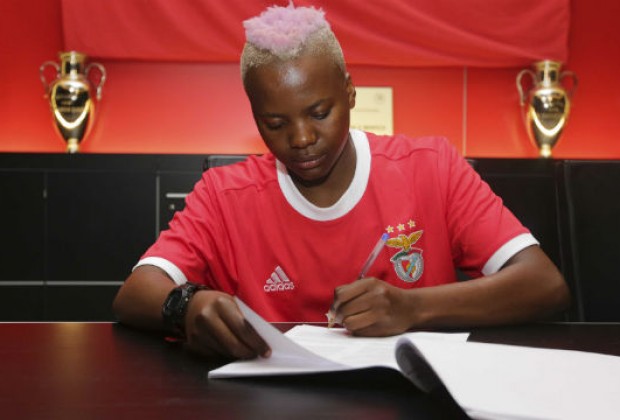 Following hot on the heels of Kelso Peskin, who is now on the books of French side Toulouse FC Féminines, and Linda Motlhalo who signed Djurgarden in Sweden, Kgatlana will now turn out in the colours of Benfica Feminino in Portugal.

The 2018 CAF Women’s Player of the Year, and nominee in 2019, joins from Chinese Super League side Beijing BG Phoenix.

The 23-year old is excited about her new football chapter.

“I thank the fans for their support. We are in first place in the Championship and I ask that they continue to support us so that at the end of the season we can lift the trophy,” said Kgatlana on the club’s website.

Benfica’s vice-president, Fernando Tavares was equally excited to have secured the signature of Kgatlana.

“We have very high expectations of Thembi. She was considered the best African of the year in 2018, she is a player with very strong characteristics, she is very fast, she can play one or two different positions,” said Tavares on the club’s website.

She was part of the Banyana Banyana squad that qualified for the FIFA Women’s World Cup for the first time ever, and scored South Africa’s only goal at the tournament.

Kgatlana spent only one season in China, and before that played for Houston Dash in the USA.