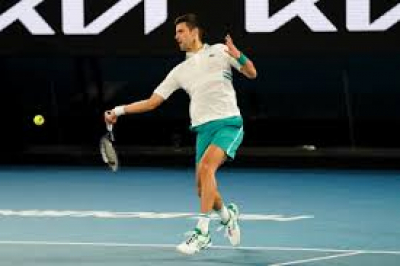 (AFP) - Novak Djokovic took his place in the Italian Open semifinals on Friday with a 7-5, 7-6 (7/1) win over Felix Auger-Aliassime which guaranteed that he would remain world number one for a 370th week.

Top seed Djokovic is chasing a sixth title in Rome ahead of Roland Garros later this month, and needed more than two hours to win a match which featured some magnificent tennis from big-hitting Auger-Aliassime.

Canada's Auger-Aliassime crashed in serves of over 200km/h, hitting 11 aces, and showed a wide range of bold shots in his first ever match against 20-time Grand Slam winner Djokovic.

The 21-year-old, who won his first ATP tournament in Rotterdam in February, even went toe-to-toe in rallies with Djokovic, drawing applause from the Serb early in the match with one particularly deft drop shot.

"He's got the lethal serve, honestly, one thing is to practice another thing is to play against someone in an official match... It was not easy at all for me to return," Djokovic said after the match.

Djokovic showed touches of class, exemplified by a lob at the end of a thrilling rally which broke Auger-Aliassime's serve in game six of the second set to move the 35-year-old 4-2 ahead.

Auger-Aliassime brought the crowd to their feet by fighting back to take the set to a tie-break, where his brave resistance finally met its end.

Djokovic is top of the bill again on Saturday night for his clash with Casper Ruud where he can claim his 1 000th career victory on way to the final.

Stefanos Tsitsipas made the semis by beating local hero Jannick Sinner 7-6 (7/5) 6-2 in a clash which was stopped for over 10 minutes at match point after a spectator fell ill.

Next up Tsitsipas will face Alexander Zverev, who comfortably saw off Cristian Garin, the only unseeded player left in the tournament, 7-5, 6-2.

It will be the third time in the space of a month that the German will meet the Greek in the last four, with the pair sharing the honours from clashes in Monte Carlo and Madrid.

More in this category: « Kaizer Chiefs found guilty and fined for fielding ineligible players. Tiger Woods continues comeback from severe injuries at PGA. »
back to top