Rassie will find a way to get around World Rugby ruling' |CJ Stander. 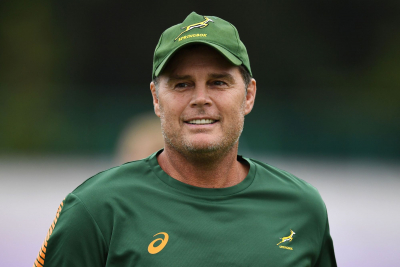 A tweet by SA Rugby's Director of Rugby Rassie Erasmus had former Ireland international CJ Stander smiling from ear to ear after World Rugby took the step of clamping down on water carriers.

The world body said no Director of coaching or head coach could be a water carrier - this in response to complaints after Erasmus did exactly that during the British and Irish Lions tour of South Africa last year.

Erasmus responded with a cheeky tweet intimating that his title at SA Rugby could change to ensure he could still be a water carrier, but it was taken by most - outside world rugby - in jest.

Stander believes no matter what World Rugby do, Erasmus will find a way of working around the laws they put in place. Innovation is something that is often seen in rugby where coaches get creative to exploit laws before World Rugby changes them again in response to mostly northern hemisphere complaints.

"I am smiling because I saw his tweet," Stander said on a URC conference call on Wednesday.. "But there are always ways around it. If you get technical, there is an advantage to having your coach, director of rugby, or anybody who is knowledgeable. Lots of teams have coaches on the side of the pitch, running water. It just depends who it is.

"So, I don’t think they will ever get to clamping it down to not have anybody there because, when I was playing as a captain or a player, it was good to get those messages from somebody who has a different perspective."

"I can see why they want to clamp it down, but there will always be a way around it. I also think it helps the game, not just him but the game in general. When I was playing we had defence coaches running around with water. It just gives you confirmation when you make a decision on the field that it is the correct one."

As Stander says, it is nothing new, and rugby coaches will find other ways of getting messages onto the field. World Rugby's reaction now looks like a direct response to the Lions complaints on Erasmus, and instead of coming up with better solutions, and understanding the way coaches get messages onto the field, they have reacted emotionally.

But it won't stop another innovation coming along in future, and until the northern hemisphere teams complain to a body based in Dublin, it won't change.

More in this category: « Naomi Osaka returns to French Open with questions over form. Tiger Woods opens with birdie at PGA Championship. »
back to top