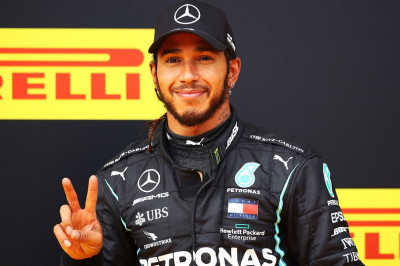 Lewis Hamilton hailed what he believes is a breakthrough with his Mercedes after a promising showing in Spanish Grand Prix practice.

Hamilton said: "It is positive. I am super happy with the progress. We're not the quickest yet but I think we're on our way."

Russell said he believed Mercedes could retain their form into the weekend.

"I see no reason why we can't be as far away from the front [in qualifying] as we showed [today]," he said.

However, he cautioned that Mercedes had also looked good in Friday practice in Miami two weeks ago, only to fall away in qualifying and race, and that Ferrari and Red Bull were running their engines in a less aggressive way than Mercedes on Friday.

Mercedes, like many teams, have taken a car upgrade to the Spanish Grand Prix. It is aimed at solving the "porpoising" or "bouncing" problem on the straights that has afflicted them all year.

This is an aerodynamic phenomenon that forces Mercedes to run the car higher than they would like and which they believe is restricting their ability to use all its potential.

Hamilton said: "It is the first time we have driven down the straight without bouncing. We still have some bouncing but it is way better and we are starting to eke into the potential of the car.

"It is still tough but it is much nicer than it has been before.

"I am grateful for the upgrades. We just need to fine-tune them. I think we can get it into a better place tomorrow to tackle the heels of the guys up ahead."

Red Bull's Max Verstappen was only fifth fastest, behind the second Ferrari of Carlos Sainz. The world champion was 0.336secs slower than Leclerc and less than 0.2secs quicker than Alpine's Fernando Alonso.

The cars of the two title contenders showed diametrically opposed performance patterns - Leclerc quick over one lap but 0.6secs slower on average than Verstappen on a race simulation run; Verstappen slow on one lap, but the fastest of all on a long run.

"It's a bit tricky to find the right balance," Verstappen said. "We clearly have a bit of work to do over one lap but the long runs look quite decent. I am happy with that but we need to try and find a middle way."

All the drivers were struggling with high tyre usage in the 30C temperatures at the Circuit de Barcelona-Catalunya, which are expected to remain consistent all weekend.

Hamilton said: "The tyres are struggling in general this year in terms of overheating. Everyone is in the same boat.

"You can't attack in these temperatures. You have to do a lot of management. It feels like more management than we've ever had to do in the past, so they're weaker tyres. That's not a surprise. We knew that would be the case this year."

Ferrari, too, have their first significant upgrade of the season, the centrepiece is which is a new floor, while Red Bull have continued their programme of taking mass out of their car to try to get it down to the minimum weight limit.

It is said that a further 4kg - equivalent to about 0.14secs in lap time - has been shed from the Red Bull since Verstappen won the Miami Grand Prix two weeks ago, the equivalent of a little more than 0.1secs.

Behind Alonso, Red Bull's Sergio Perez was seventh, ahead of Aston Martin's Sebastian Vettel, an encouraging performance from the British team who have the single biggest upgrade of any team this weekend.

The Aston Martin features brand new bodywork that bears a striking resemblance to the Red Bull, leading to an off-track controversy.

The design has been cleared by governing body the FIA, but Red Bull are still not happy and have questioned whether some of their intellectual property has made its way to Aston Martin, who have poached several employees from the multiple champions in recent months.

McLaren and Alfa Romeo also both have major upgrades, albeit less controversial ones, but they did not have good days.

Lando Norris ran wide at the fast Turn Nine early in the second session and damaged the McLaren's floor, bringing an end to his session.

"I ran wide over the exit kerb of [Turn] Nine and damaged the car," Norris said. "We are quite limited on new parts so we wanted to make sure we saved them and not do any more damage. A misjudgement on my part. But it has been a relatively decent day. I think we're in a good place."

And Valtteri Bottas's Alfa Romeo broke down after he had briefly supplanted Alonso in the time sheets early in the session. The Finn ended the day down in 16th.