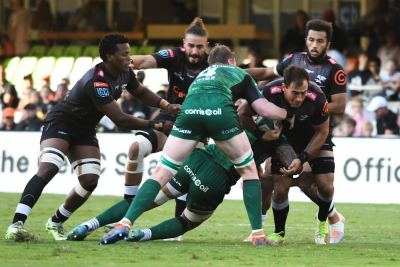 The Sharks were well out of it at 24-7 down with four minutes to go but bounced back to grab what could yet prove a significant losing bonus point for them with two Houdini like moments from reserve scrumhalf Grant Williams and inside centre Marius Louw.

In the first, in the 57th minute, Williams did all the running to send Louw in for his team’s second try, and then just two minutes later, with the home team deep on the attack, Louw ran onto a lofted kick form near the Sharks' line and passed out to Williams who had the gas and the space to run three quarters of the length of the field to score the try.

There was still about half a minute to go after Boeta Chamberlain’s conversion, meaning that there was time for one more play.

The Sharks held onto the ball well but like they were for most of the match, they were a bit laboured about it and eventually Ulster turned over possession to win the game and possibly end the Sharks’ hopes of winning the South African Shield if the Bulls beat Ospreys in the game being played concurrently.

To be fair, while the Sharks will be disappointed to come so near and yet so far, they did well just to get the bonus point in a game where they were comprehensively outplayed by a better organised and more clinical and urgent Ulster team.

Ulster might lament that they didn’t themselves help their quest to clinch home ground advantage in the playoffs by grabbing a try-scoring bonus point, such was their dominance of most of the game.

Indeed, it was in pressing for that all important fourth try that they conceded the third try that allowed the Sharks to grab theirs.

For they didn’t make the most of all their opportunities and should probably have been further ahead than 10-0 at halftime.

Ulster exposed several weaknesses in the Sharks’ defensive system, with inside centre Stuart McCloskey and flyhalf Billy Burns allowed far too much leeway through the middle defensive channels.

The Sharks have evolved into a bit of a set-piece team of late, and when you do that you have to make sure that you dominate the set phases.

Although they did get a couple of scrum penalties in the second half, they didn’t quite do what they were expected to, and the lineouts were also untidy, and it played a role in the Sharks’ inability to get into the game until those final crazy minutes when they managed to open the game up.

Poor at the breakdown

The Sharks were poor at the breakdown too. The Durbanites won enough possession to threaten Ulster but were unable to because of the pedestrian manner with which they recycled the ball and also because of their lack of attacking shape.

It has to be said that this was a game where some of the problems with Curwin Bosch’s game, both on attack and defence, re-emerged.

It would be unfair to lay the blame for the defeat at the flyhalf’s door, however, for it was a night when several players, including Springbok captain Siya Kolisi, were just well short of their best.

The bottom line was that Ulster were able to create space out wide far too easily and it accounted for two of their three tries, while the other try was scored by McCloskey surging through the middle of an abject defensive effort.

Ulster's scrumhalf John Clooney’s game management was excellent and he played a pivotal role in the Ulster win.

It was Clooney who contributed the first points in the game with a penalty in the 16th minute as Ulster capitalised on what at that point was a quite marked territorial advantage. It was balanced out later in the game.

Ulster scored their first try in the 27th minute as the ball went wide into space and fullback Mike Lowry took the inside pass to score. Cooney kicked the conversion to complete the first half scoring.

McCloskey's try came four minutes after the start of the second half, with the conversion extending the Ulster score to 17-0.

The Sharks did start to carry the ball more effectively after that and after a prolonged period where they laid siege to the Ulster line, and it was then that their scrumming came together and was most effective, the decision to switch to a tap rather than another scrum from a scrum penalty seemed to surprise Ulster as replacement prop Nthuthuko Mchunu drove over the line to make it 17-7 with Bosch's conversion.

With more than 15 minutes to go, the Sharks could see light at the end of the tunnel, but that light was extinguished almost immediately as wing Robert Baloucouney was set free wide on the right and he sent centre James Hume in for the try with an inside pass.

That looked like game, set and match until the Sharks’ two-try burst that brought some momentary anxiousness to the Kingspan faithful.