Teenager Alcaraz headlines as French Open gets glimpse of future. 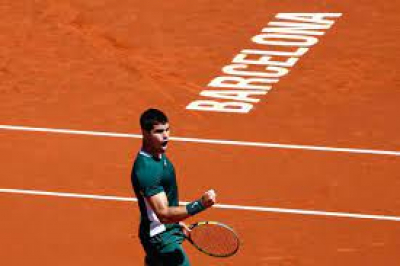 Carlos Alcaraz headlines the first day of the French Open on Sunday as the teenage Spanish sensation gives Roland Garros a glimpse of the future of Grand Slam tennis.

The 19-year-old, bidding to become just the eighth teenager to capture a major men's title, is widely tipped to end the dominance of 13-time champion Rafael Nadal and two-time winner Novak Djokovic.

Alcaraz is the tour's dominant player in 2022, winning a season-leading 28 matches with just three losses.

Three of his titles have come on clay in Rio, Barcelona and Madrid where he defeated Nadal, Djokovic and world No 3 Alexander Zverev to take the title.

On Sunday, Alcaraz begins his French Open campaign against Argentine lucky loser Juan Ignacio Londero, ranked at 141 but who made the last 16 in 2019.

Alcaraz was ranked 97 this time last year. He was only two when Nadal won the first of his 13 French Opens in 2005 but he made his mark at the 2021 tournament where he came through qualifying to reach the third round.

"He definitely is special," admitted Djokovic of Alcaraz, who also claimed the prestigious Miami Masters earlier in the year.

Top seed Djokovic, who turns 35 on Sunday, and fifth-seeded Nadal, with 41 Grand Slam titles between them, are not in action on the first day.

Also sitting out the opening programme is women's world No 1 Iga Swiatek, the 2020 champion in Paris, who is on a 28-match win streak, having won five successive tournaments.

German third seed Alexander Zverev, a semifinalist in 2021 when he gave up a two sets lead to Stefanos Tsitsipas, begins his bid for a maiden Slam title against Austria's Sebastian Ofner, ranked at 218.

Ofner, without a win on the main tour since July last year, has come through qualifying at Roland Garros for the first time in five attempts.

Two-time runner-up Dominic Thiem, whose ranking has slipped to 194 after a lengthy battle with a wrist injury, plays Hugo Dellien of Bolivia.

Thiem has yet to win a match since his return in March.

Jabeur, the first Arab or African player to capture a WTA 1000 title with her victory in Madrid, has dreams of replicating her 2011 junior triumph on the Parisian clay.

The 27-year-old has made three clay finals this season – losing to Belinda Bencic in Charleston and Swiatek in Rome – and boasts a tour-leading 17 claycourt wins this season.

Also in action on Sunday is Greek fourth seed Maria Sakkari against Clara Burel of France.

Sakkari was a semifinalist at the French Open in 2021 where she was defeated in three sets by eventual champion Barbora Krejcikova.

More in this category: « Fiorentina beat Juventus, Atalanta out of Europe. Chelsea need to 'over-perform' to close gap on top two |Tuchel. »
back to top