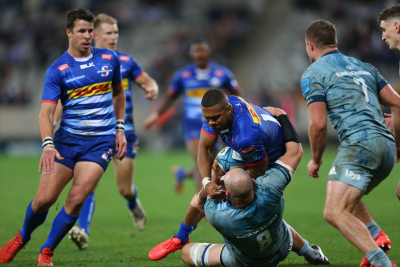 No-one who has watched Leinster play recently would disagree that there is a low road to the Vodacom United Rugby Championship final and the DHL Stormers will be pleased to have avoided it and be on the high road.

What makes the knock-out phase of the competition different for the South African challengers is that they are no longer getting their first experience of playing the opposition that they face. While Edinburgh will come to Cape Town for their quarterfinal emboldened by the knowledge that they are just one of two teams to have won in this country, the Stormers should also have a good recollection of their first meeting with Edinburgh last October.

It was their third game of the competition, and it was also the Stormers' first taste of a synthetic surface. Edinburgh scored two early tries and built up a big early lead at the DAM Health Stadium but the Stormers were the better team after that and came back to draw the game. They were unlucky not to win it.

It was an away fixture at an embryonic stage of their growth spurt, so they should feel confident about their chances of doing what is needed in front of their fans to secure a home semifinal the following week. For the Vodacom Bulls and the Cell C Sharks, who clash in the other quarterfinal to be played on South African soil, the road ahead has one big unavoidable bump in it - it's called Leinster.

The Leinster second string team showed against Munster in the last game of an enthralling final weekend of league competition what the Sharks and Stormers probably knew already - there is enough depth in the champion Irish province for the two coastal teams to have been pleased with their narrow wins when Leinster came here understrength.

But Leinster, who should easily get past Glasgow Warriors in their home quarterfinal and could well be playing as European champions by then, are unlikely to field their second team in a semi-final against either the Bulls or the Sharks.

And they will be playing in Dublin. The Bulls know how difficult that will be as they were hammered at the Aviva Stadium in the first game of the competition.

Stormers' Path a more realistic one

Should the Stormers get past Edinburgh their path to the final will be a more realistic one. It was close and they’d readily admit they were lucky, but they did beat Ulster last time they were here. And if it is Munster that win the Irish derby quarterfinal and advance, then the Stormers will be playing a team that lost both their games here when they toured and that they themselves pushed to the limit in their second game of the competition in Limerick in late September.

What all the South African teams will have in common though when they land back home after their third trips overseas in the season is that they will be wanting a fourth overseas trip. Well, maybe the Stormers can avoid it if the winner of the Loftus quarterfinal then beats Leinster, which would set up a Cape Town final if the Stormers get that far. But let’s be realistic. It is unlikely to happen, so the Stormers are playing to get back on a plane and the Bulls and Sharks when they meet at Loftus will be playing to get back on a plane too. It is true that the odds are always stacked against the travellers in an inter-hemisphere play-off game, but that is better than being out of the competition.

Although the Sharks lost their game against Ulster, all three teams probably ended the weekend feeling they have reason to feel upbeat. For the Stormers and Bulls that is obvious because they have home ground advantage in a playoff and the Stormers have the first South African Shield to put into their hitherto empty trophy cabinet.

But the Sharks will feel that they dodged a bullet. When they lost to Ulster, they would have had visions of having to return to the Kingspan Stadium for their quarterfinal. But fortunately for them the rest of the results conspired in their favour. A flight to the highveld to play the Bulls is infinitely preferable to a return to the northern hemisphere so soon after this most recent trip. They will want to get on a plane again, but that can wait.

Not that playing the Bulls is in any sense going to be easy. Jake White’s men have momentum and have impressive form. Two late tries obscured the magnitude of their win over the Ospreys in Swansea. Their win was never in doubt and theirs was the most impressive performance turned in by a South African team on the final weekend.

The Sharks will know that the last time they went to Loftus they broke a long drought at the venue. The Bulls will be mindful of the caveat though - the Sharks probably wouldn’t have won that game had it not been for the red card shown to Morne Steyn at a very early stage of that match.

The Sharks, even though they are the team most laden with Springboks, also have the most improving to do. As they have turned themselves into pretty much a set-phase team, it was quite obvious from an early stage of the Ulster game, when the visitors fronted them in the scrums, that the Durbanites were going to struggle.

The Sharks did well to grab the bonus point with a late two try burst in the final four minutes but in essence it just obscured the reality that they were comprehensively outplayed on a night where all the concerns about the Sharks, such as Curwin Bosch’s poor defence and the related issue of lack of attacking shape, plus pedestrian and inaccurate recycling at the breakdown, came back into view.

The Sharks pack was what got them through the home run of matches against overseas teams, but it is hard to escape the feeling that their forwards just don't work quite as hard as the Stormers and Bulls forwards do when it comes to general play. If there is something their coach should be asking for, it is more urgency and energy.

That said, they did only lose by three at a difficult away venue where few expected them to win. And they do have the scrum to hurt the Bulls. The Bulls’ scrum was good against the Ospreys without being rewarded like it should have been by the referee and if at full strength they have a chance of fronting the Sharks. It is when they have to dig deeper in their resource base that they struggle.

Bulls need to play for 80

The Bulls' biggest potential Achilles heel isn’t their scrum though, it is their habit of drifting in and out of games and not pushing the accelerator down for the full 80 minutes. They can’t afford the late fade that has marred some of their most recent performances against the better teams, and they should also note, the fact the Loftus game will be played at altitude notwithstanding, that the Sharks are very much a second half team these days.

The Stormers did well to beat a Scarlets team that was highly motivated and raised its game as well as the refereeing calls that for a long time held them back. When they were trailing by nine points after 27 minutes they were in a dark hole as one thing you don’t want to do in a high pressure away game is go behind and bring the home crowd into the game.

They did show great composure to get through it and change the momentum of the game, and even better composure to win it with the last move. The ability to do that shows championship qualities. If they do want to graduate to being champions, however, they are going to have to sort out their lineout, and also work on the indiscipline that helped the Scarlets stay in the game.

There's also the question of their youthfulness and lack of experience, which was advertised by the nerves they showed early doors. There again, this was a weekend where we saw that from both Liverpool and Manchester City in the early parts of high-pressure fixtures in another sport, so non-one is immune…

The Emirates Lions weren't playing for anything in their last game against the Dragons but they will be pleased to have finished the season with a win and, compared to where they were a few months ago, they should feel relatively content with a 12th place finish. And South African rugby should be pleased too as they have three teams in the final top five and no team in the bottom third of the log. You wouldn't have predicted that last October.