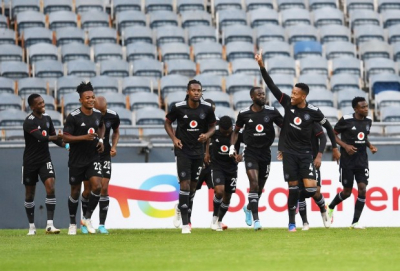 Orlando Pirates kept their chances of qualifying for the Caf Champions League alive with their emphatic 4-1 DStv Premiership victory over Maritzburg United at Orlando Stadium on Tuesday night.

Thembinkosi Lorch was the star of the show with a goal and two assists to help Mandla Ncikazi's side return to winning ways. Kwame Peprah, Deon Hotto and Kabelo Dlamini also got on the scoresheet for the hosts, with Friday Samu getting a solitary reply for the Team of Choice, who finished the season in 12th place.

The Sea Robbers moved up to sixth in the standings on 43 points, six away from their target of CAF Champions League football. Should the Buccaneers beat Royal AM and SuperSport United on May 27 and 30 respectively they will finish runners-up in the league.

Pirates were looking to snap a three-match winless run in the top flight, while Ernst Middendorp's team went in search of back-to-back victories for the first time since September to finish the campaign on a high.

The visitors created the first chance after just three minutes when Samu lined up a shot from range that flew narrowly past the right post before Amabhakabhaka started asking questions of their own.

Lorch forced Marcel Engelhardt into a save with an effort from inside the box after latching onto a through-ball from Bandile Shandu in the eighth minute and the midfielder struck the right post two minutes later with a shot from just outside the area.

However, Lorch would not be denied a third time around on 21 minutes as he slotted home into the bottom right corner of the net after being set up by Deon Hotto on the counter.

The Team of Choice looked to respond and Tawanda Macheke was inches away from equalising with a close-range header on 25 minutes after getting on the end of Clayton Daniels' cross.

But they were fortunate not to fall further behind on the half-hour mark when Happy Jele directed a header against the upright from a short corner.

Macheke threatened again four minutes later with a strike from distance that drifted just to the right of the goal and he dragged an effort wide of the left post on 41 minutes after cutting inside from the left flank.

Bucs would finish the half on the front foot though, after they scored a second goal three minutes before the break through Peprah, who tucked his shot into the bottom left corner of the net from outside the box.

It was 3-0 on the hour mark as Hotto got in on act with a finish from inside the box after being picked out by Lorch, although the KZN outfit pulled one back just three minutes later from the right boot of Samu to register his fifth goal of the season.

But Pirates restored their three-goal cushion with 21 minutes left on the clock and Lorch provided his second assist of the game when he found Dlamini inside the area on the right to fire past Engelhardt.

Peprah nearly made it five two minutes later, but Engelhardt was on hand to keep out his shot from range and it was the Ghanaian's last involvement as he was replaced shortly afterwards, having picked up a slight knock.

Pirates went on to use their full quota of subs in the end to give Shandu and Lorch a breather ahead of the games against Royal and SuperSport in the coming days.