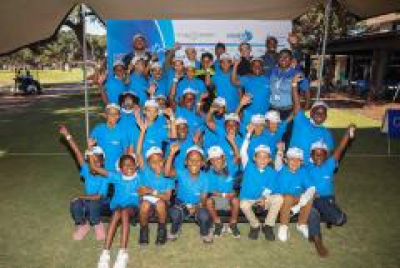 Kathu, Northern Cape – When the young golfer with no shoes arrived with a bunch of other kids to take part in the Sunshine Tour's golf development clinic at this week's Sishen Classic, professional Alphius Kelapile felt like he knew everything about that boy without ever having met him before.

"I grew up the same way as these kids. I come from the same communities and the environment is the same as I grew up in. It humbles me," said Kelapile, who together with fellow professionals Alex Haindl and Henning du Plooy worked with about 40 kids from Kuruman and Kathu and helped them with a few of the basics of the game at the Kalahari Country Club on Wednesday.

These golf clinics are a regular occurrence at Sunshine Tour events. They form part of South African golf's general development focus that begins with the talent identified and nurtured by the South African Golf Development Board (SAGDB) and a host of other programmes run by the PGA of South Africa and the foundations of individual golfers such as the Ernie Els and Fancourt Foundation (EEFF) and others, and at the highest level culminates in professionals who form part of the Sunshine Tour Transformation Class supported by Investec, Betway, VAT It and Credit Guarantee. This week, the partnership with the Sishen Classic and Anglo American is another way for the sponsors to give back to their local Kathu community by giving the kids exposure to professionals at Sunshine Tour events.

And they all have one thing in common – opportunity.

"There is a saying that every child needs one adult to believe in him or her. I see that as my responsibility," says Anne-Marie Rabie, who runs the Playgolf programme in Kuruman which teaches the kids the basics of chipping, putting, pitching and the full swing.

"It's all about giving them that self-confidence. When they start to see they can play golf, you can visibly see how they start to believe in themselves more, and they start doing better at school as well."

"Golf is an expensive sport so it was tough even getting to a golf course to play. But at the Leopard Park Golf Club in Mafikeng there was a member there – Wandile Bozwana. He was the one behind my talent and who funded me. He identified me and supported me. So it's a privilege for me to be a part of such a golf clinic. The Sunshine Tour has started the Transformation Class, and it's becoming easier for players to come through from disadvantaged areas. The Sunshine Tour is doing very well when it comes to transformation."