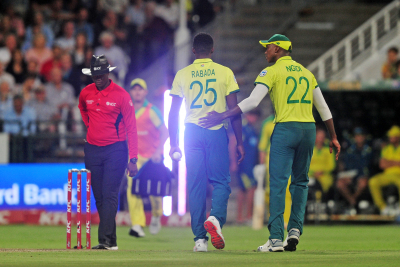 The 1st ODI between India and South Africa has been called off due to rain without a ball being bowled in Dharamsala.

The match was always in doubt after the weatherman forecast widespread rains and thundershowers over the region.

While several international sporting events have been cancelled or postponed due to the coronavirus outbreak, the two cricket boards decided to go ahead with three one-day internationals despite concerns.

The Indian government said it wanted the national cricket team’s upcoming matches to be played in empty stadiums.

The second ODI will be held in Lucknow before Kolkata’s Eden Gardens hosts the final match.

Tweet
More in this category: « Itumeleng Khune returns to the Bafana Bafana fold after a long absence. Tiger Woods will be inducted into the World Golf Hall of fame in its class of 2021. »
back to top