Stormers name side to face Bulls with Deon Fourie set for 100th match. 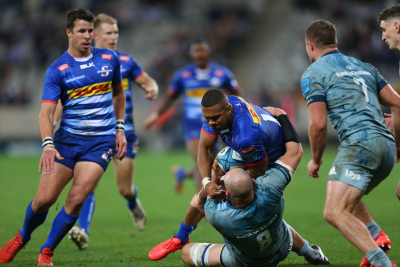 The DHL Stormers have confirmed the one change to their team, with Sergeal Petersen coming in for the injured Leolin Zas on the wing for Saturday’s Vodacom United Rugby Championship final against the Vodacom Bulls in Cape Town.

Zas left the field injured during last week’s semifinal against Ulster and coach John Dobson said after the game that he wouldn’t be ready for the final. While Zas will be missed for his strike ability - he is the top URC try scorer - and his physicality, Petersen will bring his experience of playing fullback to what could be a wet weather and therefore kicking dominated championship decider. Petersen's selection on the right wing means a positional switch for former Blitzbok start Seabelo Senatla, who moves into Zas' place on the left.

In the other change to the match day 23 that did duty in last week’s 17-15 win, Junior Pokomela comes in for the suspended Adre Smith on the bench as Dobson continues with the six/two split between forwards and backs that has worked for him throughout his team’s URC campaign.

It is not something people speak about much anymore, but it is interesting to note that Pokomela’s inclusion brings the racial representation spread in the Stormers team to 13/10 in favour of black players. So the Stormers are not just in contention for the main prize, they are also doing it while closely marking the Cell C Sharks when it comes to being the leading franchise in transformation.

The match will be a special landmark occasion for flanker Deon Fourie, who along with reserve prop Brok Harris is a survivor from the Stormers team that lost to the Bulls in the 2010 Orlando Stadium Super Rugby final. This will be Fourie’s 100th appearance for the Stormers, with his stint at the Cape franchise having been interrupted by a six year sojourn playing overseas.

Dobson's decision to lure Fourie back at the age of 34 (last year when he was contracted) was one of several brilliant recruitment moves from the Stormers coach, who lost several marquee players during the lockdown period when Western Province’s financial woes became the main media talking point relating to Cape rugby.

Sacha Mngomezulu, who made his debut off the bench in the quarterfinal and didn’t get onto the field in the semifinal, will be playing in a URC final after playing just one game at this level.