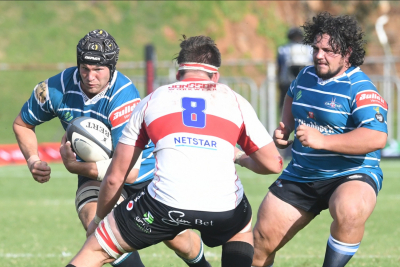 The Griquas last made the Currie Cup final back in 1970, and despite facing a depleted Bulls side missing their United Rugby Championship stars, they still defied the odds to pick up a fantastic win and reach the competition final for the first time in 52 years.

The hosts got off to a decent start in the match, and after getting an early penalty, chose to go for a lineout instead of the posts, with the Griquas defending well to clear the danger.

Another penalty to the Bulls in the 10th minute saw them decide to go for posts, only for flyhalf Juan Mostert to strike the upright, with the ball bouncing out.

The home side’s good start was finally rewarded in the 26th minute as they set up a lineout deep in the Griquas' 22m.

The lineout was then overthrown to charging eighthman Muller Uys, who was tackled just short, setting up the pick and go option, with captain Lizo Gqoboka then burrowing his way over for the opening score. Mostert converted for a 7-0 lead.

The Griquas then had a chance to get their opening try with a minute to go in the half, but their 5m lineout was brilliantly defended by the Bulls, meaning the visitors had to settle for a penalty after the halftime hooter, which replacement back George Whitehead slotted from halfway.

Straight from the kick-off at the start of the second half, the Griquas earned another penalty, with Whitehead again on target to make it 7-6 after 42 minutes.

Another long-range strike from Whitehead then gave the Griquas a 51st-minute lead, with the visitors then going over for their first try four minutes later, as wing Munier Hartzenberg made the initial break, feeding flank Hanru Sirgel to go over in the corner. Whitehead secured the extras, giving them a 16-7 lead.

In the 67th minute, strong play from the visitors then saw them on the attack in the Bulls' 22m, going through the phases before space was earned for Whitehead to dive over and dot down, converting his own try to take a big 23-7 lead with 13 minutes to go.

An exciting final 10 minutes then followed as the game came to a thrilling conclusion, with both teams throwing everything into it in an effort to win the match.

Bulls replacement back Bernard van der Linde scythed through a gap and went over, with Mostert’s extras giving them hope at 23-14 with six minutes left.

But straight from the kick-off, the Griquas went up the other end, set up a 5m lineout and looked to be rumbling over when the Bulls stopped it illegally, leading to a penalty try that ended the game as a contest.

There was still time for Mostert to dive over for an unconverted try just before the final hooter, but it just added gloss to the scoreline as the Griquas celebrated a famous win.

More in this category: « With no rankings points on offer, Bouchard pulls out of Wimbledon. Eddie Nketiah signs new Arsenal deal and gets number 14 shirt. »
back to top