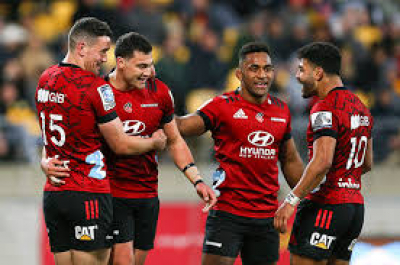 Crusaders strangled the Blues 21-7 with a ruthless display of power rugby to win an 11th Super Rugby title in an all-New Zealand final at a rain-soaked Eden Park on Saturday.

Scrumhalf Bryn Hall and winger Sevu Reece scored tries either side of halftime, while Richie Mounga ran the game with a brilliant display at flyhalf and contributed 11 points from the boot.

The Blues, roared on by a big home crowd, came into the match with 15 straight wins but were simply unable to get on the front foot and unleash their talented backs until it was too late.

Scrumhalf Finlay Christie gave them a sniff of hope with an opportunist try in the 59th minute, but a defensive mix-up gifted Reece a score four minutes from time to put the result beyond doubt.

It was a sixth straight title for the Crusaders under coach Scott Robertson after they won the last three editions of trans-continental Super Rugby and the domestic Aotearoa competition in the last two years.

"We've always talked about effort on both sides of the ball," said All Blacks lock and Crusaders veteran Sam Whitelock. "It's not always about scoring points, sometimes it's about stopping them from scoring."

Super Rugby relaunched this year as a Pacific-focussed championship, but the final result was the same as 10 of the 24 editions of the pre-Covid competition.

On display were the steely defence, dominant set-piece, forwards who battle for every breakdown and backs who looked to attack at every opportunity that are in the DNA of the Christchurch-based dynasty.

The Blues, dominant in the early years of the competition, had looked to usurp the Crusaders on the back of a high-octane attack but initially looked shell-shocked at the intensity of the contest.

For all their domination of territory and possession in the opening half, the Crusaders had only a drop goal and penalty from Mounga to show for their efforts until just before the break.

Leicester Fainga'anuku had earlier been held up over the line and the hulking winger was stopped just short when he launched himself at it again.

Argentine flanker Pablo Matera was pushed back from close range but Hall cleverly dabbed the ball down for a try through a jumble of legs.

The Blues lineout was in all sorts of trouble, and those woes continued after the break, another turnover leading to a Crusaders penalty which Mounga converted for a 16-0 lead after 46 minutes.

Christie finally got the Blues on the board when he pounced on a loose ball at the back of a Crusaders scrum for a converted try that cut the deficit to 16-7, but even that was too steep a mountain to climb against the visiting defence.

"Really disappointing, we had a good season, we wanted to come here and do a job here tonight. It's a tough one to swallow."