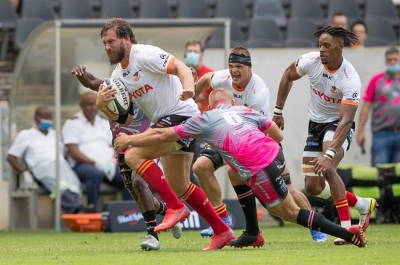 The Airlink Pumas clinched a pulsating Carling Currie Cup semifinal win over the Toyota Cheetahs with a stunning last-minute try to pip the favourites by 38-35 at the Toyota Stadium in Bloemfontein on Saturday.

The win, in which they scored six tries to four, enabled the Pumas to contest their first-ever Currie Cup final against the Windhoek Draught Griquas in Kimberley next Saturday. It is a matchup that hardly anyone would have predicted with the Cheetahs and the Bulls first and second on the Currie Cup log with home semifinals to follow.

As it was, the Pumas were contesting their first Currie Cup semifinal in 52 years, but now they have finally made it to the final stage.

The Pumas began the match in dominant style and there was only one team in it for the opening half-hour as the Cheetahs were unable to get into their stride.

The visitors, playing with intense physicality, opened the scoring in the seventh minute when a clever behind-his-back pass from skipper Willie Engelbrecht enabled Eddie Fouche to touch down between the poles. His simple conversion gave the Pumas an encouraging seven-point start.

The Cheetahs then levelled matters up in their first serious attack in the 16th minute when their No 8, Jeandre Rudolph, plunged over in the left corner after a number of phases. Captain Ruan Pienaar duly converted from the touchline.

The Pumas responded brilliantly almost immediately when a Cheetahs’ move broke down. De Beer burst through and a superb inside pass to Sebastian de Klerk freed the centre to touch down. Fouche was unable to convert and missed a further two kicks at goal by halftime.

The Cheetahs then suffered a major blow when the experienced Pienaar, a major weapon for them, was forced off with an injury to his right hip, to be replaced by Rewan Kruger.

The Pumas then added another five-pointer in the 25th minute when De Klerk scored again, this time after another inside pass from Daniel Maartens. It was Maartens, however, who then gave the Cheetahs a present when he collapsed a maul on the Pumas’ line, not only conceding a penalty try but also being yellow-carded.

This seemed to galvanise the home team with Siya Masuku kicking two penalties to even the scores at 17-17. The half finished successfully for the Cheetahs after brilliant stepping by Rosko Specman opened the way for juggling fullback Clayton Blommetjies to hang on to the ball to go over after some fine inter-passing.

The Pumas, who had played so well in the opening half-hour, might have struggled to believe that they were behind at the break. This impression would have been magnified at the start of the second half as Cheetahs’ centre David Brits powered 40 metres down the left wing before the ball was traversed to the right where Rudolph plunged over for his second try. A second penalty for Masuku then extended the Cheetahs’ lead to 32-17.

The Cheetahs continued to dominate play until the 61st minute when, out of nowhere, Pumas’ flyhalf Tinus de Beer wriggled through a gap to enable Giovan Snyman to dive over. The try was converted and the Pumas were suddenly back in the match.

With ten minutes to go, Masuku then kicked his third penalty to open up an 11-point gap but the never-say-die Pumas refused to give in and a yellow card for Specman for cynical play opened up the Cheetahs’ defence for replacement Simon Raw to barge over from a maul. De Beer converted and the gap was only four points.

In a remarkable climax, De Beer then created the winning try for Ali Mgijima to dive triumphantly over under the poles. The fulltime siren then sounded just as De Beer kicked the conversion.

More in this category: « Clinical Crusaders boss Blues 21-7 to secure Super Rugby Pacific championship. Naomi Osaka pulls out of Wimbledon due to Achilles injury. »
back to top