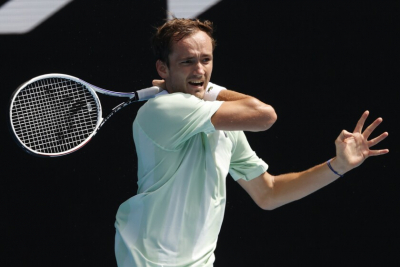 The Australian wild card, who has excelled on the surface over the past fortnight and backed up last weekend's Stuttgart semifinal, was unable to earn victory against the Pole who defeated Roger Federer last year at Wimbledon.

Fifth seed Hurkacz produced 27 aces of his own in a match of more than two hours during which neither man was able to seize any momentum.

Wimbledon semifinalist Hurkacz, ranked 12th to the 65th of Kyrgios, will aim for his first grass court title on Sunday when he plays Daniil Medvedev.

Kyrgios was in good spirits after going down to Hurkacz, whose massive serve rivals his own.

"He's a hell of a player," the Australian said.

"His serve is incredible. I honestly didn't feel like I was getting any sort of read on it.

"I was playing well in the last two sets, but I played a shocking tiebreak in the second set. It is what it is, I'm happy with my form this week."

Kyrgios will play again next week in Mallorca in a final grass-court tune-up before Wimbledon which starts on June 26.

"I might use it as a down week, so I'm not gonna worry too much about the result - but now that I say that, when I get there I will obviously want to continue my form," he added.

Kyrgios is also pumped for Wimbledon, even if the fortnight will not offer ranking points due to the political standoff between the ATP and the All England Club after the ban on Russian and Belarusian competitors.

"I want to try and pick up as many points as I can (before Wimbledon)," Kyrgios said.

"I still want to do well at Wimbledon, but with no ranking points you don't feel the pressure as much."

Medvedev needed 65 minutes to win the opening set, helped as his opponent double-faulted on a set point.

He sealed victory on his first match point after 96 minutes, delivering his eighth ace.

"Reaching the final is not everything, I want to show my best tennis and win the title."

He added: "I'm happy hat I managed to raise my level this year on grass. I love playing on grass."

Medvedev is seeking his first trophy since ending Novak Djokovic's chances for a calendar Grand Slam last September with victory in the US Open final.

More in this category: « Top seed One Jabeur to face Belianda Bencic in Berlin final. Mercedes say 'porpoising' modification will not be raced. »
back to top