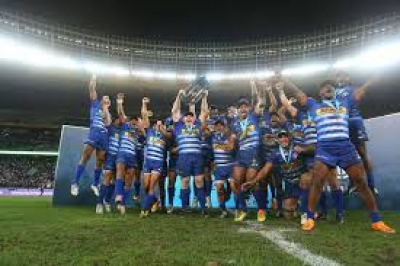 The DHL Stormers completed their rags to riches fairytale as they weathered the storm before an inspired second-half performance set them on the path to an 18-13 win in an entertaining and tense Vodacom United Rugby Championship final at DHL Stadium on Saturday.

The Stormers conceded a try in the second minute of the game to fall 7-0 behind and the Bulls had enough of the first half hour to be comfortably ahead, but the Stormers showed their customary resilience to thwart the threat.

By halftime it was clear the home team was settling and then in the second half they came out energised to dominate the game as they overhauled the deficit to run out comfortable victors.

The Stormers, who were at 66 to 1 at some bookmakers to win the title as recently as January, secured their first major intercontinental trophy and are the inaugural winners of the URC in its current format.

In a year where they have lost just once in 16 starts, no-one will deny that the Cape team, superbly coached by John Dobson, are deserving holders of the trophy.

In many ways the game was similar to the 2017 Currie Cup final in Durban, when Dobson coached Western Province to a come-from-behind victory against the Cell C Sharks.

On that occasion the Sharks had the better of the first half and were comfortably ahead until about 10 minutes before the break before WP broke back into the game just before halftime to trail by just five.

After that WP had all the momentum and didn’t allow the Sharks back into the game, and it was the same in this final.

The Bulls, who did have the disadvantage of having had to travel to Leinster and back for their semifinal, started like they had played in their excellent victory against the PRO14 champions the previous week.

There was much fanfare at the start as the 31 000 crowd created a boisterous atmosphere, and it had hardly settled when the Bulls set up an attacking lineout and from there their opening and what proved only try of the match was all too easy for them as centre Harold Vorster dotted down.

The Bulls were on fire and they had the Stormers camped in their own half. The Stormers looked a little shell-shocked, but as has tended to be the case for them this season, they found a way to survive the sustained pressure placed on them by the Bulls. Had the Bulls scored again at that point, it might well have been a different result.

The Stormers did force a penalty at the first scrum, and a few at the breakdowns, to relieve some pressure, but it was only determined defence that kept the seething Bulls, motivated not just to win the trophy but also to avenge the two league defeats they suffered at the hands of their Cape opponents, at bay.

The longer they survived without scoring points though the more the Stormers started to get into the game, and by the final 10 minutes of the half it was clear they weren’t going to go away and might be moving into the ascendancy.

Manie Libbok did miss a kickable penalty in one of the rare Cape team incursions deep into the Bulls half, but the flyhalf was on the mark at the halftime whistle as the Stormers went to the break just 7-3 down.

Given the pressure they had been under, and how little of the game they’d had, trailing by just four would have been seen as a win by the Stormers, and so it proved.

Although Chris Smith did kick a penalty not long after the restart to extend the lead by to seven points, the Stormers produced an almost carbon copy of the Bulls’ early try, with Evan Roos driving over.

Libbok converted and the Stormers were level at 10-all. They were never headed again, and neither did they look likely to be as their 16th man, the noisy and passionate crowd, got in behind them as they swarmed all over the Bulls and kept them pinned in their own half.

GREAT FIELDING OF THE CONTESTABLE KICKS

The Stormers’ fielding of the Bulls’ high balls was magnificent, and Sergeal Petersen, back after some while away due to Leolin Zas being preferred, was outstanding, as was fullback Warrick Gelant, the other wing Seabelo Senatla and Damian Willemse in ensuring that somehow the Bulls hoists ended up not being capitalised on by the visitors but carried forward by the hosts.

The Stormers lineout, dicey for much of the season, was near perfect when it mattered, and after conceding the early try their maul defence, and their own mauling, was excellent.

An even bigger shift in momentum came when Bulls centre Cornal Hendriks was carded, and when in the 56th minute, from the penalty that attended the Hendriks care, the Stormers drove a lineout for replacement hooker Andre-Hugo Venter to dot down, the Stormers were ahead for the first time.

The Bulls did strike back with a penalty to cut the deficit to two points but it was the Stormers who were by now spending most of the game in the Bulls half and dominating the battle for possession and the gainline, as well as the breakdown.

All the forwards were magnificent, with Evan Roos but also Salmaan Moerat and skipper Steven Kitshoff being standouts.

Neethling Fouche carried the ball well when he came on as a replacement, and Herschel Jantjies made good decisions at scrumhalf, while Libbok dropped a goal in the 75th minute to take the lead back to five points.

By contrast the Bulls back three, although given some space to manoeuvre in the first half, were restricted by the accuracy and energy of the Stormers' second half kick and chase, with the Bulls players often being tackled back and as a result prevented from picking up any kind of attacking momentum.

FINAL MINUTES IN RIGHT PART OF THE FIELD

The Bulls were still in the game, but the Stormers played most of those final minutes in the right area of the field to complete a fairytale season in fitting fashion.

The Bulls, let it be said, did face something of a Herculean effort given they had travelled overseas and back the previous week, and like Ulster in the semifinal against the Stormers the previous week, looked out on their feet in the final minutes, indeed for much of the second half.

But the Stormers did set up the easier route to the trophy by finishing second on the log, and had the Bulls brilliant performance against Leinster to thank for the fact that they weren’t in Dublin playing Leinster today.sß

That would have been a much harder task for the Stormers, but as it was the Bulls were formidable opposition and hung in to ensure they were still in the game up to the final whistle.

More in this category: « Sadio Mane set to join Bayern Munich after £35m transfer agreed with Liverpool. Jon Rahm content despite costly US Open bunker mistake. »
back to top