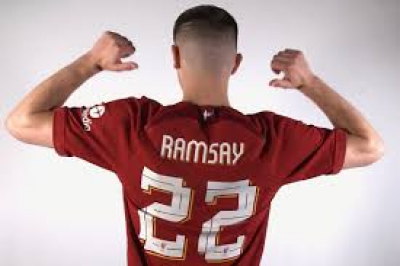 Ramsay recorded nine assists in 33 appearances across all competitions for Aberdeen in the 2021-22 season as they narrowly avoided relegation from the Scottish top-flight and reached the final round of qualifying for the Uefa Europa Conference League.

His performances earned him the SFWA Young Player of the Year Award while he also has European experience through the Europa Conference League, along with U21 international experience.

Liverpool had been locked in talks with the Dons over the defender after making an initial £4m offer, with £2m in add-ons.

But the £6.5m fee agreed ensures Ramsay will become Aberdeen's record sale, surpassing their current record of £3m from Nottingham Forest for Scott McKenna. The Dons have also received an extra £1m for the centre-back this summer after Forest were promoted to the Premier League.

"It was a dream come true to play for Aberdeen, and now to be at one of the biggest, if not the biggest club in the world, it's a massive achievement and I'm looking forward to trying to show the fans what I've got," Ramsay said.

"Hopefully I can come in in pre-season, show everyone at the club, the staff, players what I've got and then we'll see what happens from there."

More in this category: « Max Verstappen beats Fernando Alonso to take pole in Montreal. Wet grounds delay play in 2nd ODI between England and the Netherlands. »
back to top