Shelly-Ann Fraser-Pryce equals her own 2022 world's best time in Paris. 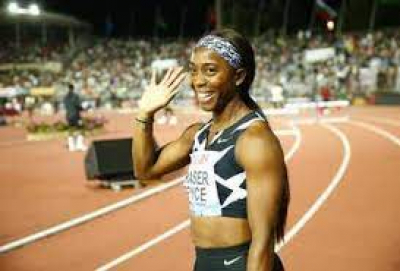 Shelly-Ann Fraser-Pryce equalled her 2022 world's best time to win the 100m at the Diamond League meet in Paris.

"The goal is always to be on top technically, then the lap times follow," said Fraser-Pryce, 35.

She ran the same time in Nairobi in May, which has only been beaten by four other women in history.

Fraser-Pryce added: "Physically I was good too. Running 10.6, only a few sprinters can achieve that."

Britain's Elizabeth Bird just missed out on a top-three finish as she came fourth in the women's 3,000m steeplechase.

South Africa's Luxolo Adams was a surprise winner in the men's 200m as he crossed the line in 19.82 to hold off the challenge of Alexander Ogando, who finished second, while Canadian Olympic gold medallist Andre de Grasse was fourth.

NFL-bound Devon Allen, who ran the third quickest men's 110m hurdles time in history at the New York Grand Prix earlier this month, continued his fine form with victory in the French capital.

Allen, 27, is to pursue an NFL career after earning a contract with the Philadelphia Eagles in April.