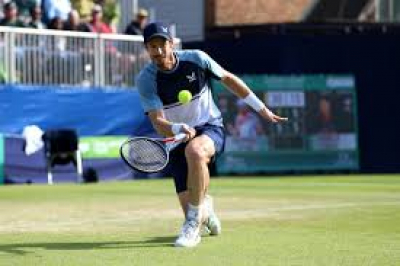 (Reuters) - Italian Matteo Berrettini retained his title at the Queen's Club Championships with a 7-5 6-4 defeat of Serbia's Filip Krajinovic on Sunday, as the world number 10 gave himself the perfect launch pad into Wimbledon.

Berrettini had too much firepower for unseeded Krajinovic, who has now lost all five of his Tour-level finals.

The Italian, who also claimed the title in Stuttgart this month, has now won 20 of his last 21 matches on grass, his only loss coming in last year's Wimbledon final to Novak Djokovic.

He was made to work hard by Krajinovic who broke back in the first set, only to get broken again at 5-5.

A Krajinovic double-fault proved costly at 2-3 in the second set as Berrettini secured the decisive break of serve and went on to secure his seventh career title.