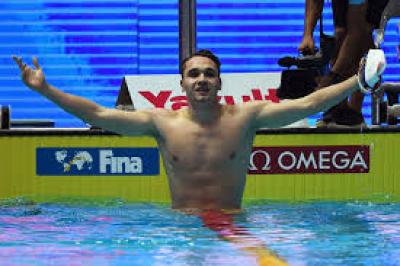 A capacity crowd at the World Swimming Championships was deprived of one star on Tuesday night as Caeleb Dressel scratched but saw the one they wanted, roaring local hero Kristof Milak to a world record.

Milak won the event he dominates, the 200m butterfly while Dressel, the defending champion, pulled out of the 100m freestyle semifinals and mixed medley relay just before the session.

That called into question the much anticipated showdown between the two in the 100m butterfly, where Dressel holds the world record and edged Milak in the Olympic final last year. The heats are on Thursday morning.

"Whether Dressel is there or not I will stand there and do everything I can in the 100 fly for a gold or a silver or a world record, this is all my focus," Milak said after winning the 200m butterfly in a world record.

"Of course it would be better if my big opponent was here, at home as it were, for a head to head fight."

"A decision has been made by Team USA in consultation with Caeleb, his coach and the team's medical staff for him to withdraw from the 100-metre freestyle event on medical grounds. The team will determine his participation in the events later in the week," said a US team statement.

They refused to give any more details.

For Milak's final, a close-to-capacity crowd produced the famed Duna roar for the first time this week.

Milak, the reigning Olympic champion, racing in lane four which goes to the fastest qualifier, responded with 1min 50.34sec to shave 0.39sec off the world record he set winning the last world title in 2019.

It was Hungary's first gold of the competition.

"It's a completely different experience to go out there to the pool in front of so many people who are rooting for you and who you are swimming for, it's a mutual thing," Milak told Hungarian television.

"When I stepped on the blocks and got ready I felt as if I was in a dream, a feeling of being so in the flow.

"This is my home, my pool. I train here, I race four, lane four belongs to me. I really wanted to show something big for these fantastic people."

Milak beat France's Leon Marchand by a huge 3.03sec but said that energy from the crowd had not been entirely beneficial.

"I went off so quick, the first 50 was stronger than ever, driven by the crowd, that meant the remaining three 50s weren't good," he said.

"From a technical point of view it wasn't a good swim, or a clever swim, but if I am a little more clever, and with more training, then, hopefully, I can get an even better time."

Without Dressel, who swam the butterfly leg as they finished fifth in Tokyo, the United States ended the evening by taking gold in the 4x100m mixed medley relay ahead of Australia and the Netherlands.

Olympic champion Bobby Finke made another late surge to grab gold in the men's 800m freestyle.

Ukrainian Mykhailo Romanchuk led for half the race and went into the final turn first with Finke back in fourth.

As he did in Tokyo, the American's last lap sprint carried him to victory. His time of 7min 39.36sec was an American record.

The United States ended the evening by taking gold in the 100m mixed medley relay ahead of Australia and the Netherlands.

Wednesday could be a day for the rising stars, as 15-year-old Canadian Summer McIntosh chases her first gold in the women's 200m butterfly, 17-year-old Popovici is poised for his second gold in the Dressel-less men's 100m freestyle, and 20-year-old Marchand is after a golden double in the men's 200m medley.