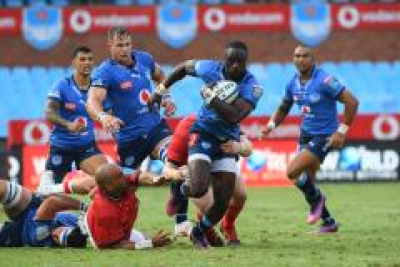 Madosh Tambwe has penned an emotional farewell letter as he prepares to leave the Bulls for French Top 14 side Bordeaux Bègles.

Tambwe is set to join Top 14 outfit Bordeaux, bringing his two-season stint with the Bulls to an end.

The 25-year-old moved to Pretoria from the Sharks in February 2021 after finding regular starting game time difficult to come by in Durban.

At Loftus Versfeld, Tambwe scored eight tries in 19 appearances in the Vodacom United Rugby Championship, helping the Bulls progress to the final of the tournament.

Trying to fit my journey at this club in 10 photos or a video is close to impossible, it was short-lived but boy it was one hell of a joyride, my career has taken another direction and I am looking forward to this next chapter which I’ll grab with both arms,” the winger wrote on social media.

"Got a few thank yous to give, firstly to Edgar Rathbone thank you for allowing me to join one of, if not the best franchise in the country that is the Vodacom Bulls. Jake White, Thank you for the impact you’ve had not only in my career but my life as a whole, I’ll never forget these years of working with you, as well as the backroom staff, coaches, doctors and physios thank you. Elias Bennett thank you for your services thanks for being a great manager and person!

"Lastly my teammates, the most important people in all this, we might not have finished the season on our terms but I wouldn’t choose to have done it with any other bunch of individuals! Thank you for the great memories we made in my term serving the Blue, going to miss you guys and only wish you guys the best individually and collectively in your journeys going forward.

"To the Loftus faithful! Thank you for making my experience in Pretoria memorable."

Tambwe is not the only France-bound Bulls player, with Arno Botha officially confirmed to be joining Lyon next season. The three-capped Springbok was into his second stint as a Bulls player, having previously represented the team between 2012 and 2017, before moving to the UK.

Another unforgettable two years in my rugby career, awesome memories and lifelong friendships. It’s sad to leave again, but excited for the next journey at Lyon. Thanks, Bulls and everyone involved for making this possible."