Wales coach wary of Bok scrum ahead of three-test tour. 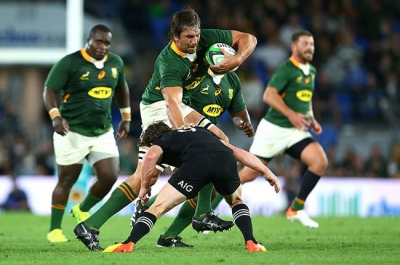 Wales are wary of facing the South African set-piece, which coach Wayne Pivac praised as "the best in the world" ahead of his side’s three-test tour of the Republic.

Wales will leave Cardiff on Thursday en route to Pretoria, where they will face the Boks in their first test on 2 July and bring along a pack of players that will need to stand up to the physicality that the Springboks are sure to bring, especially on their home turf.

Pivac added 21-year old prop Harri O’Connor to the touring party earlier this week, a surprise to those in his country as he has just 207 minutes of senior rugby for his club Scarlets.

While Thomas Francis struggles with a back niggle, it means two of Wales four tightheads are uncapped. Sam Wainwright is the other uncapped tighthead in the scrum.

Wales are likely to field Francis, if fit, alongside Dewi Lake and Rhys Carre in their front row for the tests against the World Champions.

Pivac sees the tour as two-fold. Standing up to the Springbok scrum and ensuring the younger players learn from the best in the world.

"It’s always a concern if things don’t go well, but there is always the opportunity for young players to learn a lot and grow. There is no better learning than going up against the best in the world in any sport, "Pivac said on his scrum’s chances against the World Champions.

At the moment you’d have to say the South African scrum has shown that it has consistently been the best in the world. Their lineout drive is superb and their forward play is probably second to none.

"They are not World Champions for nothing and they are very good at what they do. So if you are a young guy going on tour going up against that, you are going to learn a lot. You will learn what you have to do to get to that level, or hopefully you will go very well and start off on what could be a very long career for yourself.

"It is an exciting time for any youngster going on a tour like this."

He did smile when asked about tactics on the tour, and like many other sides who face the Springboks, intimated his team are likely to try and avoid the setpieces against the Boks, especially as it is one of their strengths.

Running lines and avoiding collisions are also on the agenda.

"They’re very big men, aren’t they? And they’re very good in the collision area, so we’ve got to make sure we give ourselves every opportunity in those areas and footwork will be essential. Giving us an opportunity with our running lines, so those are things we’ve been working on and will continue to work on," Pivac smiled.

Whether Wales are successful waits to be seen.