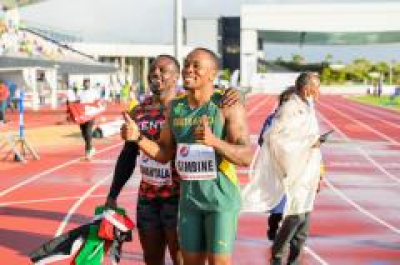 A 20-member preliminary national team has been announced by Athletics South Africa for the World Athletics Championships to be held in Eugene, Oregon from 15-24 July.

Among the 13 men in the provisional squad are the likes of Olympic finalist Akani Simbine, who will join the chase for the podium in the 100m sprint and world record holder Wayde van Niekerk, who will be hoping to regain his best form in the 400m contest.

All athletes in the preliminary ASA team have met the qualifying criteria for the World Athletics Championships, which will be held for the first time since the showpiece was last held in Doha, Qatar in 2019.

Athletes who hope to compete in Eugene can still be added to the national team, provided they achieve the required criteria by the end of the qualifying period, which closes this Sunday, 26 June 2022.

The final ASA team will be announced after the qualifying window is closed.

"There is only five days to qualify and then the door is closed for the World Champs in Oregon. We hope more athletes will still qualify so that we can have a bigger team. Athletes still looking for a qualifier must do everything to use the small window left," said James Moloi, the President of Athletics South Africa.

More in this category: « Wales coach wary of Bok scrum ahead of three-test tour. Serena Williams' comeback cut short by Jabeur injury. »
back to top