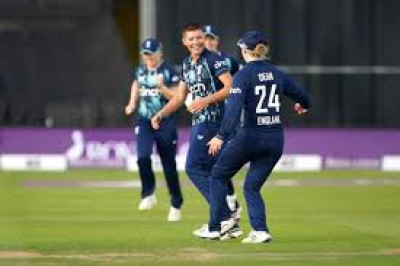 Career-best figures for Nonkululeko Mlaba and a determined half-century from Tazmin Brits were the highlights of the third and final T20 International (T20I) for the Momentum Proteas before England wrapped up a 3-0 series triumph with a 38-run win in Derbyshire on Monday.

Mlaba produced a return of 3-22 with the ball to help restrict England to 176 for six before a valiant 57-ball 59 from Brits that included six fours saw the Proteas Women fell short of their target of 177 for victory following a collective performance by England.

South Africa made the perfect start with ball in hand after being made to bowl first, with Mlaba dismissing the dangerous Sophia Dunkley for a duck with the very first ball of the match.

The early loss of a wicket didn’t slow England down though as Alice Capsey and Danni Wyatt smashed the ball to all parts of the ground before the former became Mlaba’s second scalp of the day, going out for 25 to leave the home side 41 for two after 4.1 overs.

Wyatt was then joined by the stand-in captain, Nat Sciver, with the pair adding another 45 runs for the third wicket prior to Mlaba breaking the partnership with her left-arm spin to remove Sciver for run-a-ball 24.

England’s fourth didn’t take long to fall, as Chloé Tryon (1-22) got the better of Wyatt the very next ball, clean bowling her for 30 off 25 deliveries.

With South Africa’s tail up in the field, England punched back through counter-attacking knocks from Amy Jones (28) and Maia Bouchier (18) before Masabata Klaas (1-62) and quick reactions from ‘keeper Sinalo Jafta were responsible for removing both batters in quick succession.

England entered the final two overs of their innings on 138 for five with lower-order batters, Sophie Ecclestone and Katherine Brunt (8*), at the crease as the duo went on to combine for a crucial 39 runs for the seventh wicket, including a 26-run final over to propel the home side to 179 for six after 20 overs.

In response, the Proteas Women, similarly to their opponents, suffered an early blow with the wicket of Lara Goodall (2) before Brits and Anneke Bosch (17) teamed up for a battling 54-run second wicket partnership ahead of Bosch being stumped in fine fashion by Jones off the bowling by Freya Kemp (2-18).

Brits played another significant role in a stand worth 27 runs with Wolvaardt (13) before she went on to raise her bat for a richly-deserved fifty in her first game back in the South African side after replacing Marizanne Kapp.

Despite a superb knock by Brits, the required run rate continued to rise and coupled with a regular fall of wickets, including Brits, Mignon du Preez (15) and Tryon (14), England did well to strangle the scoring rate and take the game away from the visitors to seal a 38-run triumph.

The South African side will be in action again on Saturday, 30 July when the historical 2022 Commonwealth Games in Birmingham commences with the challenge of New Zealand coming up first before taking on England and Sri Lanka to round up their Group B action.