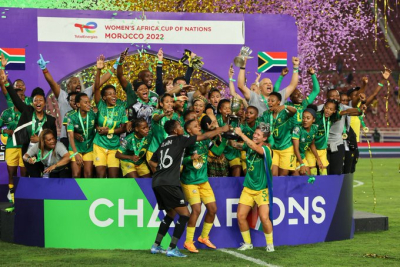 OR Tambo International Airport was on Tuesday morning heaving with noisy, excited supporters eager to greet victorious Banyana Banyana on their arrival back from winning the 2022 Women's Africa Cup of Nations in Morocco.

SA beat hosts Morocco 2-1 in the Wafcon final on Saturday night, becoming the first team to win all six games in the competition. It was their first Nations Cup win having been runners-up five times.

South Africa will also hope for a more favourable draw for next year’s World Cup, when their name is pulled out of the proverbial hat on 22 October in Auckland.

Government on Tuesday handed over a cheque for R5.8 million to Banyana Banyana at OR Tambo International airport.

Added to the R8.2 million already promised to Banyana by the South African Football Association, this takes the total amount given to the 23 players in the Banyana squad to R15 million, or about R652 000 each.

"We are not just here claiming this victory, but we worked hard for it as government," said Minister of Sport and Recreation Nathi Mthethwa, rather strangely, as it is unclear exactly what the government had to do with Banyana’s success.

Still, this added reward at least lifts Banyana past the R520 000 per player that Bafana Bafana got for only reaching the quarterfinals of the 2019 Africa Cup of Nations, as calls for equal pay for the women’s team continue to grow.

South African Football Association chief executive officer Tebogo Motlanthe confirmed that the US $500 000 (R8.4 million) Women's African Cup of Nations prize money will form part of the R400 000 the players and staff will each receive.

Motlanthe said the bonus structure that was agreed upon with the players factored in the prize money from the tournament, even before it was increased.

"We agreed with the players that they'll get R400 000 and there were a number of sources as to where the money was going to come from," Motlanthe said.

The prize money was going to be one of them. The negotiations were in good faith before the increase, but the bonus was part of that already.

"The splitting of the prize money is part of the bonuses."

Motlanthe also said the players won't be made to wait for what is due to them. Banyana, who beat Morocco in the final in Rabat on Saturday, went through the tournament unbeaten.

Watch live in the below video: