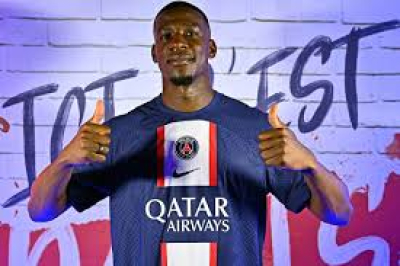 Mukiele, who joined Leipzig in 2018 from PSG's Ligue 1 rivals Montpellier, said farewell to the German side and their supporters on Tuesday in a social media post. No financial details were given but media reported he had signed for €16 million including add ons.

Liebe RBL family ❤️ I wanted to thank you for everything you have done for me. You made me feel home since the very first day I arrived and it is with heavy heart that I leave today. I want to thank everyone involved at the club that help us reach our goals on a daily basis. pic.twitter.com/4ehGcNZRQF

"At twenty-four, the native of Montreuil is thus returning to France by committing until 2027 to Paris St Germain, finding a region he knows by heart and a club he has met several times," PSG said on their website.

Mukiele made 146 appearances for Leipzig in all competitions and helped them reach the 2020 Champions League semifinals and win the German Cup this year, the club's first major trophy.

PSG start their league campaign on 6 August at Clermont Foot, who have been promoted to the top flight for the first time.

More in this category: « David Miller confident Proteas will do well against England in T20I challenge. Juventus terminate Ramsey contract by mutual agreement. »
back to top