Proteas wilt in first T20I against England, Stubbs emerges as a future star. 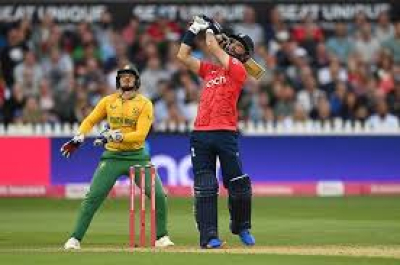 Jonny Bairstow’s 90 from 53 balls and some shoddy bowling and fielding from South Africa saw England post an intimidating total of 234-6 to earn a comprehensive victory by 41 runs in the first of three T20 Internationals at the County Ground in Bristol on Wednesday evening.

Reeza Hendricks scored a fine 57 from 33 balls (9x4, 1x6) and Tristan Stubbs contributed a stunning 72 from just 28 balls in his third game but first innings for his country as the tourists eventually succumbed to 192-8 in reply.

Stubbs illustrated all of his talent and potential with some magnificent ball-striking but the target was simply too big after a poor bowling and fielding performance from the Proteas.

Bairstow continued his imperious form in all formats this summer with a vicious display of leg-side pulling and off-side driving and cutting and had the chance of reaching a century with 10 runs required from the final two deliveries but his innings ended when a Lungi Ngidi slower ball was spliced to Rilee Rossouw at deep cover. Bairstow blasted three fours and eight sixes.

Ngidi finished with the remarkable figures of 5-39 from his four overs, an obscure consolation for the carnage suffered by the whole attack.

The Proteas dropped five catches and were clearly rattled as the innings reached its closing overs with no-balls and wides adding to England’s total.

Captain Jos Buttler (22) made a brutal start hitting both Kagiso Rabada and Ngidi for sixes in his seven-ball innings which also included two fours before a Ngidi slower ball induced a mistimed drive to David Miller at long off.

Dawid Malan belted four sixes and a four during his 43 from only 23 balls before edging a straight delivery from Phehlukwayo to Quinton de Kock but the runs continued to flow with Jonny Bairstow particularly brutal in the closing overs.

Tabraiz Shamsi endured a torrid evening conceding an eye-watering 35 runs from his first two overs and another 14 from his third to finish with the unflattering analysis of 3-0-49-0. In the absence of a sixth bowling option with neither Aiden Markram nor Dwaine Pretorius selected, Stubbs was tasked with bowling an over of his part-time off-spin and conceded 20 runs, including a no-ball resulting in a free-hit which Bairstow hit for six.

Moeen Ali (52) thrashed the fastest 50 for England in T20 Internationals from just 16 balls with a pair of fours and half a dozen sixes taking a particular liking to Phehlukwayo’s final over which cost 33 runs, the most ever scored by England against any opponents in any format, in a single over, and left Phehlukwayo with the bruising analysis of 4-0-63-0.

South Africa included hard-hitting batsman Rossouw for his first international appearance since October 2016. Rabada returned to the starting XI after being rested for the ODI series and Phehlukwayo was fit again after being concussed in the first ODI.

More in this category: « King of the Hungaroring Hamilton targets ninth victory. The fixtures for the upcoming United Rugby Championship announced. »
back to top