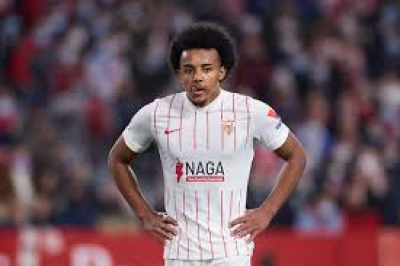 (AFP) - Barcelona have reached an agreement in principle to sign French international defender Jules Kounde from Sevilla, both LaLiga clubs said on Thursday.

Financial details of the deal were not disclosed. According to media reports, Barcelona will pay €55 million for the 23-year-old centre back.

"The official nature of the deal is dependent on the player passing a medical and the signing of contracts," Barca said in a statement.

Chelsea had made several bids for Kounde during last year's transfer window and reports suggested he was close to joining the Premier League club this month before Barcelona made a late push.

Kounde arrives in Catalonia after three years with Sevilla, where he made over 100 appearances in all competitions and won the Europa League title in his first season after joining from Ligue 1 side Bordeaux in 2019.

Barcelona have already strengthened their backline this summer with the addition of centre back Andreas Christensen on a free transfer from Chelsea.

They also signed Polish forward Robert Lewandowski from Bayern Munich and Ivory Coast midfielder Franck Kessie, both on free transfers, in a busy transfer window despite being plagued by major financial problems.

The club's spending has been fuelled by the sale of 25 per cent of their domestic television rights to investment firm Sixth Street for the next 25 years.

However, Barcelona need to meet LaLiga's salary cap to be able to register their new signings.

Xavi Hernandez's side will begin their LaLiga campaign at home to Rayo Vallecano on 13 August.

More in this category: « PGA Championship returns to St Francis Links in November. Eagles in Eswatini give Jaco Prinsloo the lead. »
back to top