Mosimane arrived at Royal AM ranch for his first coaching masterclass series. 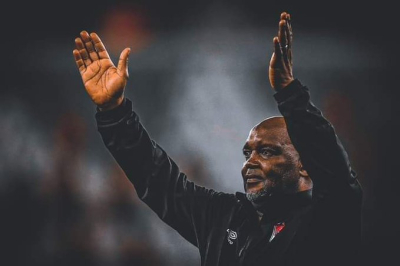 Pitso Mosimane and his technical team have arrived at the Royal AM ranch, the club confirmed on Friday.

Mosimane's management team, MT Sports had sent out teasers over the last few days that they'd be conducting a series of "masterclasses" and their first stop was at Thwihli Thwahla.

The club is yet to provide more details about Mosimane's visit and which role he and his technical team played, but president Shauwn 'Mam' Mkhize had announced "a big arrival" of someone who has "done and seen it all" earlier this week when speaking to sportscaster Robert Marawa on MSW.

The moment you’ve been waiting for. pic.twitter.com/FbcJT1NP6f

Mosimane took his whole technical team along, namely Kabelo Rangoaga, Musi Matlaba and Kyle Solomon, while Royal AM announced last week they will have three co-coaches in the 2022/23 season.

Twihli Twahla's trio of coaches in Khabo Zondo, Dan "Dance" Malesela and Abram "Wire" Nteo are set to gain great insight into the African competitions, as they look to raise the club's and their own profiles on the continent.

With the men's team set to feature in the KZN Premier's Cup and the ladies' team in the Hollywoodbets Super League this weekend, Mosimane and his team are expected to attend all the matches and continue with post-match and tournament work with the respective coaching staff.

This is MT Sport's latest concept in growing the Mosimane brand as they look to help change the landscape of African football from a technical point of view.

The day has arrived.

We are proud to introduce The MasterClass Series with Coach Pitso Mosimane, Kabelo Rangoaga, Musi Matlaba, and Kyle Solomon.??

Mosimane is also set to arrive at Tanzanian champions Young Africans next week.

More in this category: « Bayern Munich start life without Lewandowski in German Super Cup. Patience key as Prinsloo tops leaderboard in Eswatini. »
back to top