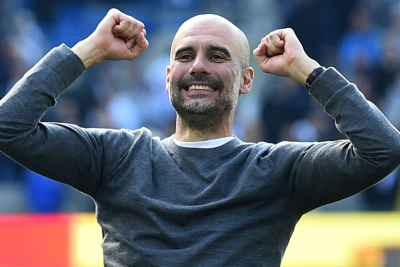 Manchester City manager Pep Guardiola said he is saddened by the departure of Gabriel Jesus, Oleksandr Zinchenko and Raheem Sterling but that the revenue generated by their transfers had contributed to the club's sustainability.

City, who have consistently ranked as one of the highest-spending clubs in European soccer in recent years, also let Sterling join Chelsea in a deal worth up to 50 million pounds. Read full story

They have fallen foul of Uefa's Financial Fair Play rules in the past, which were designed to curb excessive spending, although they limited their punishment by winning an appeal through the Court of Arbitration for Sport.

"In part I'm a little bit sad that these important players have gone," Guardiola told reporters ahead of City's Community Shield game against Liverpool later on Saturday.

"But it's a business. To invest you have to sell players, otherwise you can't be sustainable. I know the image of the club is that always we buy, buy, buy. But we sell too. We sell important players for big money.

"All the clubs know today selling players is not easy. All clubs want to do it but not everyone can."

City begin their Premier League title defence with a trip to West Ham United on August 7.

More in this category: « CAF U-turn on Victor Gomes ABSA Premiership Season »
back to top