Vincent Kompany off to winning start as Burnley boss. 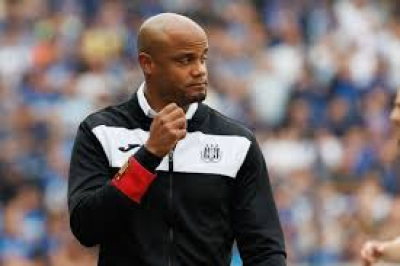 (AFP) - Vincent Kompany's first competitive match as manager of Burnley ended in a 1-0 Championship win away to Huddersfield Town on Friday.

The former Manchester City captain was appointed as the permanent successor to the long-serving Sean Dyche last month following Burnley's relegation from the Premier League.

On-loan Chelsea winger Ian Maatsen marked his debut with the only goal of the game as Burnley won on their return to the second tier after six seasons of top-flight football.

Friday's match, which marked an unusually early start to the new season because of the World Cup in Qatar getting under way in November, saw Burnley up against a Huddersfield side who just missed out on promotion to the Premier League with a defeat by Nottingham Forest in May's playoff final.

But they were not at their best with Burnley having chances to take the lead before they went ahead.

The 20-year-old Maatsen, having initiated a move down the left, curled a shot from 15 yards inside the right-hand post of Terriers goalkeeper Lee Nicholls in the 18th minute.

Burnley really should have put the result beyond doubt, with teenage debutant Dara Costelloe missing three chances alone before half-time.

But Huddersfield could not capitalise as Belgian manager Kompany, who who won the Premier League four times in 11 years as a defender with Manchester City, saw his new side take all three points.

More in this category: « Patience key as Prinsloo tops leaderboard in Eswatini. Arsenal left-back Tavares joins Marseille on loan. »
back to top