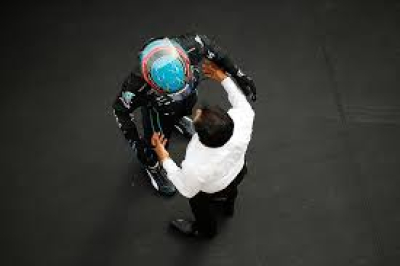 Mercedes driver George Russell stunned himself and Formula 1 with a sensational maiden pole position at the Hungarian Grand Prix.

McLaren's Lando Norris was fourth, ahead of the Alpines of Esteban Ocon and Fernando Alonso

Hamilton's DRS overtaking aid failed on his final run. Before that, he had been less than 0.2secs off Russell on their first runs in the final session.

How did Russell do that?

Russell's first career pole came in the most spectacular style, as the 24-year-old beat Sainz by 0.044secs. Leclerc was 0.146secs slower than his team-mate in third.

And it was all the more impressive for coming out of the blue.

Mercedes had been way off the pace on Friday, and were also struggling in Saturday's wet final practice session.

His final lap, though, was another dimension, improving his own time by 0.463secs.

Russell said: "Over the moon. Absolutely buzzing. Yesterday was probably our worst Friday of the entire season. We didn't really know what direction to go in and then that last lap, I went round Turn One, mega; Turn Two, mega and the lap time just kept on coming.

"We need to look into it and understand where that came from.

"No points today but we are going to be absolutely going for it."

An outstanding personal achievement, it was also a landmark for a team that has struggled with an uncompetitive car this season.

Mercedes have made strides in taming it as the season has progressed, but they came to Hungary with no concept that they might be in a battle for pole.

Sainz said he felt some small errors on his final lap had cost him pole position. He congratulated Russell but admitted he was a bit disappointed.

Leclerc said: "Today has not been a great day, I have been struggling massively with the tyres, just struggling to get the tyres in the right window. The pace is there, we just have to understand what went on with the tyres and we can come back tomorrow."

But whatever disappointment Ferrari may feel at not being on the front row, may be tempered by the knowledge that Verstappen has a battle on his hands to make up ground on a track where overtaking is notoriously difficult.

Leclerc is 63 points behind Verstappen in the championship after crashing out of the lead at the French Grand Prix last weekend, and the Italian team now have a golden opportunity to eat into the Dutchman's advantage.

Verstappen said: "We made some changes that were very positive and the car was a lot nicer today but we couldn't show it today because of the power issue. I still don't really know what it is but I hope everything is fixable."

Hamilton said: "Its the first time we've had a shot at the front row. I am happy for George, it's his first pole and he truly deserves it. He did an amazing job. It's a shame we couldn't lock out the front row, that would have been amazing.'

More in this category: « Official: Manchester United confirm the appointment of Benni McCarthy. Jaco Prinsloo claims wire-to-wire win in Eswatini. »
back to top