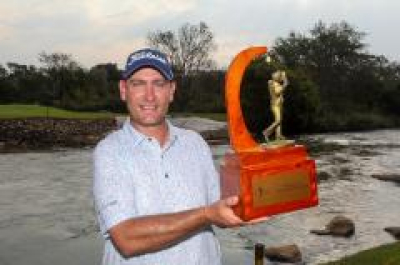 Eswatini – Multiple Sunshine Tour winner Jean Hugo and Wynand Dingle got to within a stroke at times, but Jaco Prinsloo held his nerve to stay in front and complete a wire-to-wire three-stroke victory in the FNB Eswatini Nkonyeni Challenge at the Nkonyeni Lodge and Golf Estate on Saturday.

Prinsloo shot a three-under-par 69 in Saturday's third and final round to finish on 12-under-par in the R1 million tournament, with Hugo posting a 68 to finish on nine-under-par, and a bogey on the par-three 18th hole seeing Dingle sign for a 68 as well, but slipping back into a tie for third with Keegan Thomas (68) and Martin Rohwer (69) on eight-under.

The 32-year-old Prinsloo, who counts big titles such as the 2017 Vodacom Origins of Golf Final and last year's Players Championship among his five professional titles, led by two strokes going into the final round. He made a nervous start with a bogey at the par-four first hole, but his lead grew again with three successive birdies from the seventh hole.

The Serengeti Golf and Wildlife Estate golfer went three ahead with a birdie at the par-four 12th hole, but a bogey at the par-four 14th, which Hugo birdied, made for a nervous finish, especially with the last hole being a tricky par-three.

But Prinsloo crucially managed to get a birdie-three on the 16th hole, while Hugo made bogey and Dingle could only make par, and the Centurion resident parred the last two holes for a victory that got him up to fourth on the Luno Order of Merit.

What was most impressive about Prinsloo's win was that he did what he said he was going to do as the frontrunner on the final day: He kept his head down and stuck to his game-plan, no matter what the compelling duo of Hugo and Dingle threw at him.