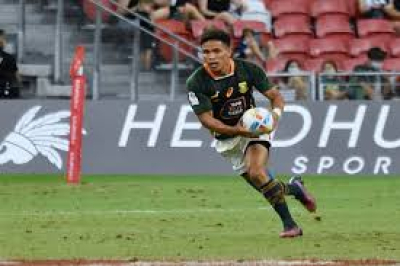 The Springbok Sevens team will face Australia in the semifinals of the Commonwealth Games Sevens tournament on Sunday after sweeping aside Canada 33-0 in their quarterfinal.

The Blitzboks booked their spot with an almost flawless execution of their defence and counter attack, while Australia were made to fight all the way by the impressive and physical Samoans, eventually winning 7-0 in a tight game.

New Zealand will face Fiji in the other semifinal as teams move closer to medal contention.

The Blitzboks started well with tries by Ronald Brown and Christie Grobbelaar, before Canada finally got some ball and put them on the front foot.

It seemed as if Canada may score after Brown got a yellow card on the stroke of halftime, but some excellent reading of the Canadian attack saw Angelo Davids intercept and run the length of the field to give the South Africans a 21-0 lead at the break.

They followed it up with tries for Brown and Mfundo Ndhlovu in the second half to secure the victory.

Sunday’s semifinals will kick off at 1:42pm (CAT, GMT+2) with the Blitzbok-Australia semifinal taking place at 2:04pm.

The South African Women’s team will face Sri Lanka in the 7th and 8th place playoff after losing 36-0 to England earlier in the day.

More in this category: « Springbok Women make history with win against Japan. Afcon qualifiers postponed to 2023 to ease World Cup preparations. »
back to top