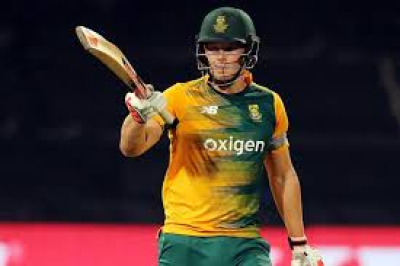 Miller, 33, brought up the milestone during the 3rd T20I against England at the Ageas Bowl in Southampton, where he is currently captaining the side in place of the injured Temba Bavuma.

Since making his T20I debut in 2010, the left-hander has gone on to cement his status as an aggressive and quality stroke player in world cricket. Third on South Africa’s leading run-scorer charts, Miller is closing in on 2 000 runs in the shortest format having struck one century and five half-centuries at an average of 32,43 and a strike rate in excess of 140.

His explosive prowess garnered the joint quickest T20I hundred with a 35-ball showpiece against Bangladesh at JB Marks Oval in Potchefstroom in 2017. His credentials also include 14 T20 World Cup appearances.

"Since his debut in 2010, we have seen David's stock rise in the international game and he is now one of the most respected, and at the same time feared, white-ball players in the world.

Today we celebrate with him his 100th cap and hope he will be here playing at the highest level for the Proteas for many more years, helping us to achieve great things."

"A heartfelt congratulations to David on this major milestone. He has been a remarkable servant of South African cricket for more than a decade. He has represented the Proteas jersey with the highest of honour and respect, always doing his best to ensure that our Proteas flag is flying at its highest. We at CSA are really pleased for him."

Reflecting on his illustrious career to date, Miller said:

"Looking back, it’s gone so quickly. I would never have dreamt to have played as many games for South Africa as I have. It’s taken me 13 years to get to reach this milestone, and I’m just really privileged to have represented my country for as long as I have, and I’m really excited for today."

More in this category: « Afcon qualifiers postponed to 2023 to ease World Cup preparations. Max Verstappen wins Hungarian Grand Prix ahead of Hamilton and Russell. »
back to top