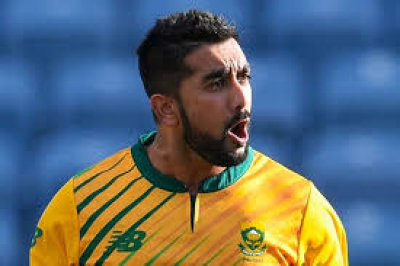 Reeza Hendricks scored his third half-century of the series to set South Africa on their way to a daunting total of 191-5 and a compelling performance in the field set the tourists on their way to a comprehensive victory by a massive 90-runs in the third and deciding T20 International at the Ageas Bowl outside Southampton on Sunday.

England's run-chase began confidently enough with captain Jos Buttler (14) and Jason Roy (17) adding 28 for the first wicket but quickly unravelled with Tabraiz Shamsi claiming 5-24 as England collapsed to 79-7 and 101 all out.

On an awkward, two-paced pitch and unusually long boundaries the Proteas struck just a single six and struggled to time the ball for most of the 20 overs until captain David Miller, celebrating his 100th T20I appearance, appeared in the 17th over and lashed 22 from just nine balls with three fours and a straight six off Jordan.

Aiden Markram accelerated effectively in the final few overs after a partnership of 87 with Hendricks in 10.1 overs during which consolidation was, wisely, top of the priority list.

Markram finished 51 not out from 36 balls with five often inventive boundaries included a reverse-scoop and a flick behind square-leg from a foot outside off stump.

When Miller was bowled by Willey there just four balls of the innings remaining at 183-4 but Tristan Stubbs (8) straight drove and pulled two of them for four before holing out in the deep against David Willey off the final ball.

Earlier De Kock departed to the third ball of the match without a run on the board when he dragged an ambitious drive against left-arm seamer Willey onto his stumps and Rilee Rossouw, having taken four fours off Jordan’s first over, was bowled by a beauty from offspinner Moeen Ali which pitched on middle and clipped the top of off stump. Rossouw’s 31 (6x4) came from just 18 balls.

Sam Curran (9) hit the only six of the innings before slapping Shamsi to Markram and the left-arm wrist spinner quickly polished off the innings in just 16.4 overs.

England won the first game of the three-match series by 41-runs in Bristol on Wednesday before the Proteas bounced back with an even more emphatic 58-run victory 24 hours later at Sophia Gardens on Thursday before the most emphatic result of the series.

More in this category: « Max Verstappen wins Hungarian Grand Prix ahead of Hamilton and Russell. Tatjana wins another commonwealth gold for SA in 200m breaststroke. »
back to top