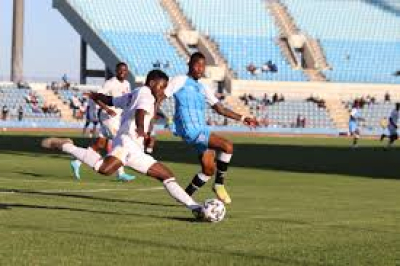 Eswatini twice surrendered a lead over Botswana on Sunday to draw 2-2, bow out of the African Nations Championship (Chan) and stretch to 14 years a record of never winning a qualifier.

After eight draws and nine losses over seven editions, the team from the small, landlocked southern Africa kingdom went ahead in each half through Sandile Gamedze and Fanelo Mamba.

But Botswana levelled via Godfrey Tauyatswala in first half stoppage time and Thero Setsile from a penalty with 15 minutes remaining to win the first round tie on away goals after a 0-0 first leg.

While Botswana played at home in Francistown last weekend, Eswatini had to use a stadium in Soweto on the outskirts of Johannesburg as they lack an international-standard ground.

Eswatini have competed in all seven qualifying competitions for a unique international tournament as it is restricted to footballers playing in their country of birth.

But a victory has eluded them since debuting against Zambia in 2008 with a 1-1 draw at home followed by a 3-0 away defeat.

Unlike many African countries whose national team is composed completely or largely of Europe-based stars, the Chan rule was no disadvantage to Eswatini or Botswana, who rely heavily on local talent.

Botswana next face Madagascar and history beckons as neither nation has qualified for the finals, which will consist of a record 18 teams in Algeria next January and February.

In the other match played on Sunday, a Madagascar side already one goal ahead on aggregate were far too strong for fellow Indian Ocean nation the Seychelles and triumphed 3-0 in Antananarivo.

Tsilavina Razanakoto cheered home supporters with a goal just five minutes into the first half and he struck again in stoppage time after Rinjala Raherinaivo had netted midway through the second half.

Besides Botswana and Madagascar, Sierra Leone, Guinea-Bissau and Djibouti kept alive hopes of a maiden appearance at the finals through first round victories.

Senegal are in contention for a return to the tournament for the first time since 2011 despite a shock 2-1 home loss to Liberia, who had trailed 3-0 after the first leg.

Nicholas Andrews converted a penalty two minutes from time in Diamniadio to produce a result no one outside of Liberia would have possibly imagined.

Ghana are another football power overdue a finals appearance -- they failed to qualify for the last three tournaments -- and a 4-0 overall win over Benin set up a showdown with Nigeria.