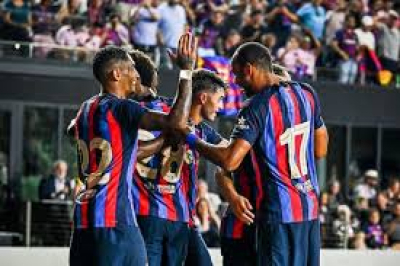 Club members had voted to allow the sale of 49 percent of the shares.

"For the moment, we have sold 25 percent to Socios.com," Laporta said at the press conference to present Jules Kounde, bought for a reported 50m euros from Sevilla, as a Barcelona player.

Earlier this summer, the deeply indebted club sold 15 percent of its La Liga TV revenue to the American investment fund Sixth Street in two tranches or a total of 400m euros before going on a transfer spree.

While the deals with Sixth Street are for 25 years, the sale to the Socios.com platform is permanent.

"It's a sale for ever," Laporta said. "There would be a way to recover this 25 per cent but for the moment this operation means the entry of a new partner, Socios.com, which has injected 100 million euros," he said.

Socios.com is a platform that allows clubs to increase their interaction with fans and try to make more money from it, including the use of Fan Tokens, a kind of digital asset based on blockchain and cryptocurrencies.

In its drive to raise money quickly, Barcelona has taken a 595m euro loan from investment bank Goldman Sachs and signed a sponsorship deal worth an estimated 435m euros with streaming service Spotify.

In August 2021, Laporta announced that an audit of the club's finances showed Barca faced an estimated debt of 1.35 billion euros.

They allowed Lionel Messi to leave for Paris Saint-Germain in 2021 because they could not afford to keep the Argentine star, even on a reduced salary.

The club also officially presented centre-back Jules Kounde on Monday, with the French international declaring he was happy to join an ambitious club.

"I'm very happy, very proud. I'm coming to a big club, an ambitious club, and I'm also coming with ambition," the 23-year-old said at his first press conference as a Barcelona player on Monday afternoon at the Catalan club's training centre.

According to the Spanish press, Barca paid Sevilla 50 million euros, with 10 million in bonuses, for Kounde who has signed a five-year contract.