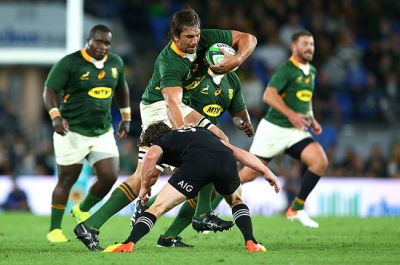 The All Blacks made their intentions clear before leaving New Zealand as to what they need to do at the Mbombela stadium this weekend when they face the Springboks - stop mauls.

While it isn’t a surprise to hear an opposition coach talk about stopping the Bok physicality, their setpieces or driving mauls, there is an extra impetus in that the All Blacks have added Jason Ryan as their forwards coach with a specific mission to do just that.

Ryan is seen as a maul specialist and seeing as Ireland scored two maul tries against the All Blacks in the now infamous test series, he is been seen as the catalyst to get the All Black pack right ahead of the Rugby Championship.

And he has the Bok rolling maul firmly in his sights.

It was a question that Springbok assistant coach Deon Davids was rightly expecting on Monday as the week’s media dance began, and while Davids is diplomacy personified, the Boks are relishing the contest up front this weekend.

There is nothing like facing the old enemy to bring up the motivation levels and the Boks have listened to Ryan’s words ahead of the trip to South Africa.

You can be sure they will be drumming it home at every moment in the preparation for Saturday’s first test in a two-week double header against the black jerseys.

The Boks know their rolling maul is a critical aspect of their game and in the test series against Wales - in particular in the first test - they finally got on top when the rolling maul started its slow poison.

In the third test this was particularly the case as the energy-sapping aspect of the game worked in their favour and perhaps masked some of the other parts of their game that need working on.

There is also the realisation that while New Zealand are hurting and are under pressure to put in an inspired performance against the World Champions, they are still some of the best counter-attackers in the game and they won’t be shying away from taking the opportunities when they get them.

The Boks dropped a lot of ball in the Welsh series and more often than not got away with it. While there are expectations from a hungry rugby public to be managed, they know that opposition teams often say if they can stop the maul they can stop the Boks.

"We have got a lot of respect in terms of how New Zealand approach the setpieces. I can understand that just as we do, they always look to improve scrums, mauls and stopping mauls. We know that will be a very highly contested and physical area, coming up against New Zealand,"Davids said.

"Their new forward coach emphasised that this is an area they want to improve in, and if you look at the work he put in with Fiji and the Crusaders over the years, we understand it will be a challenge. But we also want to get better in that area so we will prepare for that."

Davids last sentence underlines the fact the Boks didn't get the reward they wanted from the setpieces or maul in the Welsh series and know they need to improve.

There is also the danger of concentrating too much on one part of the game and leaving a gap in others, and this is something the Boks will be wary of.

And after all that is said about the mauls, the Boks know there is no such thing as an easy game against an All Black side.

And being wounded makes them even more dangerous opposition.

More in this category: « Iga Swiatek dominates WTA rankings in spite of Warsaw defeat. SABC secure broadcast rights for the English Premier League. »
back to top