Arendse backed as Kolbe replacement as Boks ring three changes for All Blacks. 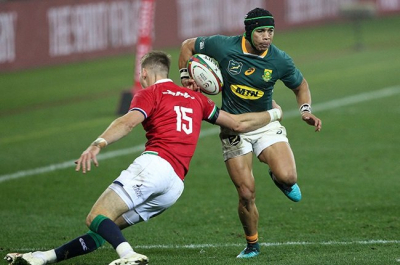 Kurt-Lee Arendse in on the right wing for the injured Cheslin Kolbe was the one anticipated change of the three made by Springbok coach Jacques Nienaber to his starting team for Saturday’s first Castle Lager Rugby Championship engagement with the All Blacks.

World Cup winning hero Kolbe sustained a broken jaw in the deciding test that the Boks won comprehensively to clinch their recent series win against Wales. Nienaber could have opted for Jesse Kriel on the wing, as he has done against both the All Blacks and England in the past, but instead went for the like-for-like replacement in Arendse, who has similar X-factor attributes to Kolbe.

The injury enforced change at wing isn't the only change to the starting team though for the match at Nelspruit's Mbombela Stadium. There has also been a change at scrumhalf, where the experienced Faf de Klerk returns to the No 9 jersey he relinquished to Jaden Hendrikse in the last two test matches against Wales.

Hendrikse does retain his place on the bench and will have benefitted for his execution of that role from his two recent starting opportunities. Speaking of the bench, there is another player who started against Wales in Cape Town moving to the Bomb Squad for this game, with Bongi Mbonambi swopping the No 2 for the No 16 to give Malcolm Marx a rare starting opportunity.

Marx must be one of the best hookers in the world, if not the best, but his ability to change momentum by coming on halfway through the game has been backed in recent times. He did play a significant role in swinging the game back South Africa’s way after they trailed by a wide margin in the first test against Wales in Pretoria.

Bok coach Nienaber will explain his selections at a lunch time press conference in Nelspruit but clearly, he’s looking for Marx to make his big impact at the breakdowns from the start of what is a crucial test match for both teams.

Among the other significant features of the starting team is Damian Willemse continuing as the starting fullback, with the more experienced Willie le Roux warming the bench again and looking to make an impact, perhaps again in tandem with Willemse, later in the game. This selection can be seen as an indication that Willemse has grown enough as a player in the first part of the international season for him to be backed as the No 1 player in his position.

On the subject of the bench, Nienaber has returned to a proper Bomb Squad, as it was first used in Japan during the World Cup in 2019, for this game. Instead of going for two looseforwards on the bench as he has in recent times, he has gone for two locks and just one loosie in the form of Kwagga Smith.

Salmaan Moerat has come in as the extra lock, though of course these days Franco Mostert doubles as both a second row forward and a blindside flank. His deployment will depend on the game situation, but the point about the Bomb Squad effect is that for the first time in a while the Boks do have an entire tight five in reserve and ready to come on to replace the starting players as a unit.

As anticipated the Boks are still without Duane Vermeulen and of course Kolbe but they do still have a healthy smattering of players who played in the World Cup final while Trevor Nyakane, who had to return home injured from Japan, has proved his worth as a loosehead prop since he was used there successfully against the British and Irish Lions.

The All Black team is to be named later in the week.