Great start for SA juniors in qualifying rounds in Cali. 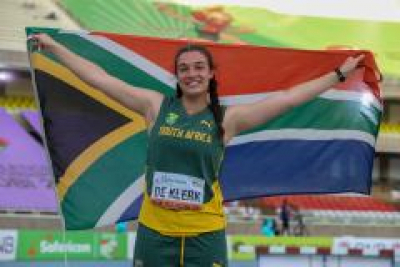 Versatile field events star Mine de Klerk led the way on Monday, as a handful of South African athletes cemented their places among the favourites of their events on the opening day of the World Athletics U20 Championships in Cali, Colombia.

She opened her campaign in Cali with a 16.11m heave in the qualifying round of the women's shot put, progressing automatically to the final, to be held on Tuesday.

Her compatriot, Zonica Lindeque, also booked her place in the medal battle with a 15.14m effort in the first round, qualifying in ninth position.

Returning to the infield later on Day 1, De Klerk landed the discus at 50.12m, completing the qualifying round in eighth position and progressing to Wednesday's final.

In the women's javelin qualifying round, Mckyla van der Westhuizen qualified automatically for the final, launching the third best throw (54.92m) of the opening round.

Van der Westhuizen will turn out again in the final on Tuesday.

On the track, Benjamin Richardson, the silver medallist in Nairobi last year, won his 100m heat in 10.33 seconds.

Countryman Mukhethwa Tshifura took second place in his first-round race in 10.36, with both athletes progressing to the semi-finals to be held on Day 2.

Denmar Jacobs also had no trouble in the 110m hurdles heats, winning his race in 13.74 to book his place in the penultimate round.