Brits keeps an eye on Vodacom Origins leaderboard, and his Bok teammates. 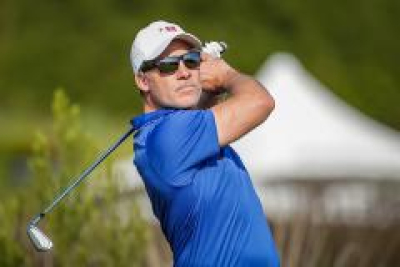 Stellenbosch, Western Cape (2 August 2022) – Former Springbok Schalk Brits says he can't recall ever seeing a Springbok team go into a Test against the All Blacks as such favourites as the current one, but that he also knows his former teammates will never underestimate their New Zealand opponents.

Speaking from the De Zalze Golf Club course on Tuesday where he is making his debut in this week's Vodacom Origins of Golf pro-am series on the Sunshine Tour, Brits' mind was as much on his swing as it was his fellow Springboks preparing for their Rugby Championship opener against the All Blacks in Mbombela this Saturday.

"For once the All Blacks have shown weakness. You have to give credit to Ireland and what Mr Farrell and his team are doing there. They were phenomenal in taking New Zealand on at their own game and the intensity and bravery with which they played was phenomenal. I definitely think Australia and New Zealand are missing the physicality of South African rugby. But do not underestimate the All Blacks," said Brits.

With his debut appearance on the Vodacom Origins of Golf Series, Brits joins an illustrious list of former South African rugby greats to have teed it up on the longest running pro-am series on the Sunshine Tour.

Francois Pienaar, Morné du Plessis, Rudolph Straueli, Nic Mallet, André Joubert, Breyton Paulse and Wayne Fyvie have all had their time inside the ropes on this series, which first teed off in 2004.

"Playing with the pros and seeing how they get around the course is amazing. It's my first experience of the Vodacom Origins of Golf and I'm loving it. It's quite a reality check as an athlete and an amateur golfer. You think you hit the ball far but then you get a pro who is half your size and hits it 30 metres past you. How they play the game is a thing of beauty to watch," said Brits.