Faf de Klerk feels the heat as All Blacks loom. 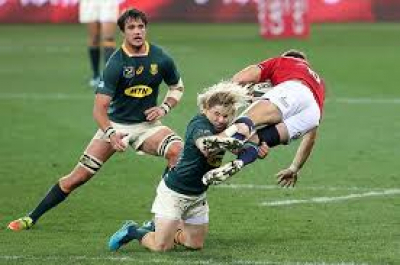 While nobody would openly say it, when the Springboks preferred Jaden Hendrikse for the 3rd test against Wales, it was a subtle message that nobody’s place in the starting line-up was safe.

And if the Bok management were intent on sending out a message it worked.

Hendrikse's selection, alongside that of Kurt-Lee Arendse this weekend was food for thought for those players entrenched in the Springbok system that performances will be rewarded, even if they come at the cost of more senior players.

The message seems to have filtered through and while Faf de Klerk returns to the starting line-up for the showdown with the All Blacks in Mbombela this weekend, he knows there is a target on his back.

The pressure from inside the camp can often be greater than anything on the outside and De Klerk has received the message loud and clear. He knows unless he puts in a good performance game after game, someone else is going to run on with the number nine on their backs.

"I think there has always been that pressure from all the nines in the camp. We’re five nines in the camp right now, and the coaches can pick anyone to start. We don’t all play a similar game but we can all do a job if needed," De Klerk said when quizzed about this on Tuesday.

"If you slip up once, you get another chance but if you do it again you’re gone because the next guy is ready to go. If you look at our entire squad, that’s pretty much the same thing. If you are experienced or a youngster it doesn't matter, you have to show it on the field.

"I enjoy the big games and the pressure, that is where the guys do very well. It’s good to have that feeling because you need to perform."

With all the talk about the All Blacks, the golden locks De Klerk wears so easily may well be forgotten, but the lessons certainly aren’t. The Boks were in a similar position not too long ago and he knows all too well what that pressure feels like going into a big game.

That is why neither he nor the Boks are writing the All Blacks off.

And as he says, when the two teams face each other, no greater motivation is needed.

"The motivation is even more. We’ve been in similar situations before and we know how it is to lose two games on the bounce. A great team stands up and wants to play. We are going to focus on our own stuff and the work we’ve put in ahead of this weekend. We will continue to put in the work this weekend,"he added.

"Playing against New Zealand there is nothing more than you need. You know it is probably going to be your biggest game of the year and you need to pitch up."

All this just ups the ante for the weekend’s clash and knowing that no matter how wounded the All Blacks are, the Boks are taking them as seriously as ever, just underlines this.

More in this category: « Paul Pogba decides against knee surgery to keep FIFA World Cup hopes alive. SA's versatile Miné defends her world title at U-20 championships. »
back to top