SA's versatile Miné defends her world title at U-20 championships. 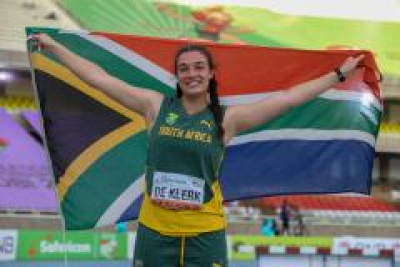 Versatile thrower Mine de Klerk and sprinter Benjamin Richardson returned to the podium on Tuesday, opening South Africa's modal count on Day 2 of the World Athletics U20 Championships in Cali, Colombia.

De Klerk produced a best throw of 17.17m in the final, holding off a challenge from Turkey's Pinar Akyol (16.84m) who bagged the silver medal.

De Klerk was set to return to the field again on Wednesday, targeting another medal in the women's discus throw final.

Having secured silver in Nairobi last year, Richardson slipped one spot on the podium, but he would have been pleased with his result after storming over the line in 10.12.

Letsile Tebogo of Botswana clocked 9.91, breaking the world U20 record to win gold, while Bouwahgie Nkrumie set a Jamaican junior record of 10.02 to grab silver.

Van der Westhuizen landed the spear at 53.44m, with Adriana Vilagos of Serbia winning gold after producing a 63.52m heave.

Brian Raats cleared the bar at 2.08m to book his place in the men's high jump final, to be held on Friday.

On the track, sprinter Viwe Jingqi coasted through the opening round of the women's 100m event, winning her heat in 11.36 and securing her spot in the semi-finals.

Her compatriot, Kayla la Grange, set a personal best of 11.73, but she was sixth in her heat and missed out on a spot in the penultimate round by just 0.02.

Lythe Pillay won his 400m heat in 46.0 while countryman Tjaart van der Walt was fourth in his first-round race in 47.00, and Precious Molepo finished second in her one-lap heat in 53.50, as all three athletes progressed to the 400m semi-finals to be held on Day 3.

In the women's 400m hurdles, Anjel Nel took second position in her heat in 58.52 and Simone de Wet finished third in her race in 1:00.35, with both athletes progressing to the semi-finals, to be held on Wednesday.

More in this category: « Faf de Klerk feels the heat as All Blacks loom. Vodacom Origins and SAGDB helping SA youth go further together. »
back to top