SA's Lill rides away with bronze in cross-country mountain bike. 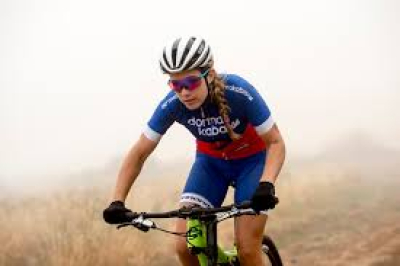 Candice Lill has been winning races for longer than she can remember. Probably even before that as well. But for the 30-year-old South African with a CV that snakes its way around the corner, winning bronze at the 2022 Commonwealth Games in Birmingham will be something she never forgets.

There are party-poopers who feel that some sports at the Games are redundant, and point to weakened fields affected by scheduling across professional codes, including cycling and athletics, and they will argue that with only eight riders lining up for the start of the women’s mountain bike cross country a medal was there for the taking.

Try telling that to someone who has ridden their heart out in Cannock Chase Forest in a race that included a three-time world champion.

Then, in third, another 26 seconds behind that was Lill, with Scotland’s Isla Short in the most heart-breaking position in sport, fourth when there are only three medals.

While Richards set a searing pace up front, Cuthbert, Lill and Short took turns to swap places behind her, a race within a race that lasted until Short was finally shrugged off with 10km of the 34km route remaining.

Out front the English rider had a cushion that was always hovering around the 30-second mark, with Lill looking the strongest of the chasing pack.

She and the Australian then took turns to surge, until about 7km remaining when Cuthberg put a bit of daylight between her and her rival.

By the time the final lap arrived the podium was sorted. Richards was allowed to soak up the atmosphere as much as one can when riding on a course as demanding as this, while Cuthbert and Lill knew that only the most unfortunate of circumstances would prevent them from finishing in silver and bronze.

For Lill, winning used to come easy, and she excelled as much in the swimming pool as she did on a mountain bike until she decided that swimming was "too boring" for her.

She’s been winning bike races since 11, so it came as a bit of a shock to her system when she went to Australia at the age of 18 – and was beaten.

I came third (as Candice Neethling in the juniors at the UCI mountain bike championships in Canberra) which was quite shocking to me because I used to win everything in South Africa. I was so used to winning and I actually think the fact that I didn’t win was the drive I needed to get me fully into mountain biking,” she recalls.

At those championships the late Burry Stander won the under-23 gold medal and Greg Minnaar took silver in the downhill event.

The men’s cross-country was won by the Swiss Nico Schurter, showing the pedigree of talent that was on show back then even.“I took a major dip at under-23 level. I found that when winning comes so easily when you’re young, you don’t necessarily work as hard and dedicate as much as others who didn’t always come first. It’s not that I was lazy, I think it was more of a mindset. People that competed against me that came fourth, fifth or sixth in the World Champs wanted to win and they were actively working towards it. When you win a lot when you’re young because you are naturally talented, you don’t know what hard work it actually requires to win.”

Here in Birmingham she dug right down into the very bottom. of her reservoir of strength to win bronze. It was a mammoth effort despite the size of the field, with two riders being lapped and one not finishing the race.

When she goes back home to place this bronze medal among the dozens of others she’s won over the years, you can be sure it will be right alongside the many golds in terms of priority. Never will coming third have felt so much like winning.

It was Team SA’s 17 medal of these Commonwealth Games, with six golds, five silvers and six bronze medals in the bag.

More in this category: « Vodacom Origins and SAGDB helping SA youth go further together. Proteas claim victory in opening T20 after Ireland scare. »
back to top