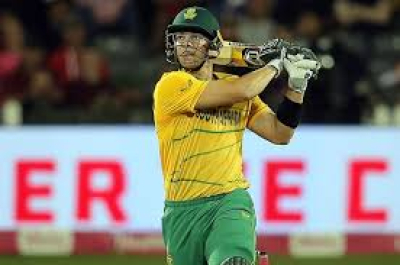 Reeza Hendricks struck his fourth consecutive T20I half-century as he and Aiden Markram helped to power the Proteas to 211 for five in their first match against Ireland at the Seat Unique Stadium in Bristol on Wednesday night.

Keshav Maharaj, captaining South Africa instead of the injured David Miller, won the toss and chose to bat first and Hendricks, who struck three half-centuries in the recent series against England, looked in prime form yet again.

He lost his opening partner, Quinton de Kock, in the fourth over when the left-hander just failed to make his ground after driving to mid-off where Harry Tector threw down the stumps. Rassie van der Dussen came and went, getting an edge to short third-man in the final over of the power-play.

Playing some fine strokes all around the ground, Hendricks dominated South Africa’s scoring in the early overs, reaching his fourth consecutive half-ton in 32 balls – the first South African to achieve the feat – out of an overall total of 76. He then found the ideal partner in big-hitting Aiden Markram who gradually took over the main burden of scoring, reaching his fifty in just 25 balls as the inconsistent Irish bowlers were put to the sword.

The two added 112 in 60 balls for the third until they both fell to consecutive deliveries from legspinner Gareth Delaney. Markram fell to a catch on the midwicket boundary before Hendricks thick-edged a cut to backward point. Markram’s 56 came in 27 balls and included two fours and five sixes while Hendricks needed 53 balls for his 74 which included 10 fours and a six.

The twin dismissals enabled Ireland to control the remainder of the South African innings to some extent although Tristan Stubbs (24 in 11 balls) and Dwaine Pretorius (21 in seven balls) took the South African total past the 200 mark.

Ireland's middle order threatened to take the victory but the #Proteas bowlers held their nerve to wrestle back the momentum restrict the hosts to 190/9#IREvSA #BePartOfIt pic.twitter.com/YpvMekhBBJ

More in this category: « SA's Lill rides away with bronze in cross-country mountain bike. Simbine, Du Toit claim silver medals at the Commonwealth Games. »
back to top